Mumbai: The London World Book of Records (WBR) laurelled veteran Bollywood actor Dilip Kumar as he turned 97 on December, 11. Officials from the WBR and celebrities came together to congratulate the legendary actor.

The veteran actor was honored for his enormous contribution to the Indian cinema and work in support of social causes. As he could not be present to receive the honour himself, his family members- wife Saira Banu, brother Aslam Khan, sisters Saeeda Khan, and Farida Khan accepted the certificate on his behalf. 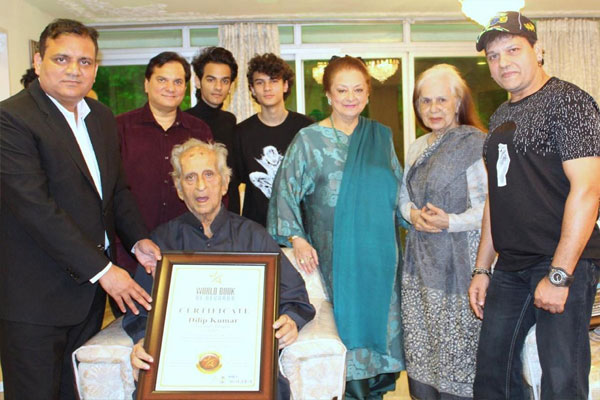 It is pertinent to mention here that the veteran actor has served the Hindi film industry for over five decades and has been acclaimed as one of the greatest actors in the history of Indian cinema. He is a recipient of nine Filmfare Awards, a Dadasaheb Phalke Award, Padma Bhushan Padma Vibhusan and Nishan-e-Imtiaz honours.

He is still celebrated for his performances in some absolute classics like ‘Devdas’ and ‘Mughal-e-Azam.’ ‘Qila’ was his last movie released in 1998.

Actor Dilip Kumar under ‘quarantine’ as…