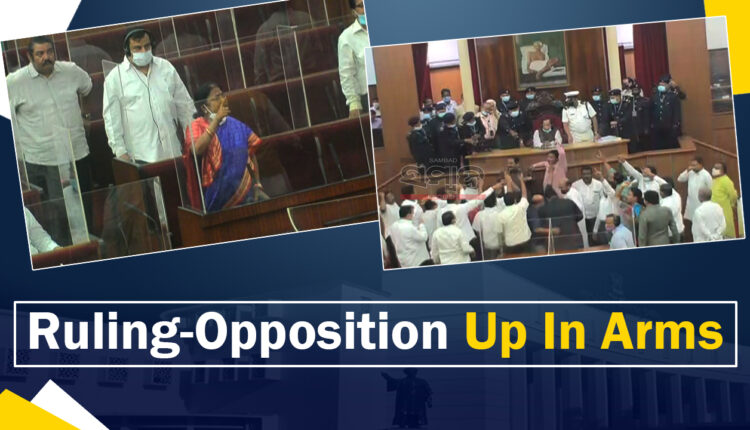 Bhubaneswar:  Pandemonium prevailed in the Odisha Assembly as soon as the House commenced for the day with legislators of ruling BJD, BJP and Congress creating an uproar over different issues.

Soon after the House assembled, MLAs of the ruling party stood up and protested the act of suicide attempt by BJP MLA Subash Panigrahi inside the Assembly yesterday. Later, they rushed to the Well of the House and created a ruckus demanding apology from the BJP legislator.

BJD Chief Whip Pramila Mallick said the issue could have been resolved through debate in the House but the MLA opted to create a scene by threatening to attempt suicide.

The saffron party MLA has tampered the dignity of the House by threatening to kill self inside the House. He should apologize for his act. We will not let the House run unless and until MLA Panigrahi apologizes.

Mandi row: Odisha Minister assures to procure paddy from all…

On the other hand, Congress and BJP MLAs opposed such protest by the ruling party in the Well of the Assembly.  Members of both parties demanded apology from the ruling party MLAs for the same.

Congress senior MLA Tara Prasad Bahinipati said, “this is the first time that Ministers including Naba Das, Dibya Shankar Mishra and Sushanta Singh went to the Well of the House and created an uproar. We will not allow the House to run until they seek apology.” However, he condemned the act of suicide attempt by the BJP MLA.

Besides, Congress MLAs protested over Mandi mismanagement in the state.