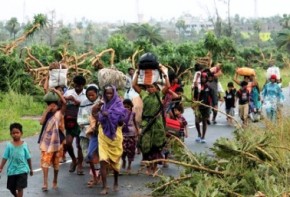 On Sunday, October 12, 2014, the very severe cyclonic storm Hudhud mauled the coastal city of Visakhapatnam and adjacent districts in India’s southern state of Andhra Pradesh. But the storm couldn’t gather further strength or last longer because of the geographical gift in form of the hill range that cushioned the city where the storm made the landfall.

The southern part of Odisha was also partially affected by the storm but there was no large scale devastation one normally associates with such powerful storms.

The loss of lives has been largely controlled. So far, the death toll of Hudhud cyclonic storm remained 24, three in Odisha and 21 in Andhra Pradesh.

Over the last decade the death toll due to cyclones has come down drastically in comparison to the loss of around 10, 000 lives during the super cyclone of 1999 that hit the northern Odisha coast.

In order to save human lives from the wrath of Hudhud cyclone, vulnerable villages in low-lying areas were evacuated and over seven lakh people were shifted to different cyclone shelters in Odisha and Andhra Pradesh, as per the government bulletins.

Early warning from India Meteorological Department (IMD), timely action by disaster response forces, administrative preparedness at the state, national and local levels indicate that India has enhanced its capacity to deal with natural calamities like cyclones and floods effectively.

Even though India has gained success in minimising loss of lives, the social and economic impacts of hydro-meteorological disasters have become a bigger concern.

“Globally, the number of lives lost to hydro-meteorological disasters, such as cyclones, has decreased 10 times, yet the recorded economic losses have increased 50 times,” says UNEP.

While official assessment of damages caused by Hudhud cyclone is yet to come, it’s believed on basis of general estimations that the cost of damage could be around Rs.10,000 crore or USD 1.6 billion.

“India used to spend around $300 million a year on disaster preparedness, evacuation and relief in the early 2000s. But last year, the country spent over $1.6 billion,” says Ajay Sreevatsan of The Hindu.

As per the Global assessment Report, 2011, of United Nations’ International Strategy for Disaster Reduction (UNISDR), “Since 1981, economic loss from disasters is growing faster than GDP per capita in the OECD countries. This means that the risk of losing wealth in weather-related disasters is now exceeding the rate at which the wealth itself is being created.”

Disaster displacement on the rise

With over seven lakh people shifted to safer places during the Hudhud cyclone, displacement due to disaster has become another issue of global concern.

As per a UN backed report ‘Global Estimates 2014: people displaced by disasters,’ about 2.14 million people were displaced in India last year due to natural disasters placing it at third position after the Philippines and China in regard to displacement in 2013.

22 million people were displaced worldwide, in the year 2013, by disasters, almost three times more than the casualties of conflict in the same year, said the report.

In 2013 alone, 2.14 million people were displaced in India due to events of natural calamities while conflict and violence displaced about 64,000 people.

While in October 2013, widespread monsoon season floods displaced over a million in several Indian states, cyclone Phailin, the strongest to hit India in 14 years, brought widespread devastation to eastern coastal areas and forced the evacuation of almost a million people.

“Between 2008 and 2013, 80.9 per cent of displacement took place in Asia. The region accounted for the 14 largest displacements of 2013 and the five countries with the highest displacement levels: the Philippines, China, India, Bangladesh and Vietnam,” the report said.

The report by Norwegian Refugee Council’s Internal Displacement Monitoring Centre (IDMC) shows that the risk of displacement due to disasters has more than doubled over the last four decades.

“Despite the magnitude of potential costs and loss of income, reducing disaster risks is still often perceived as a lesser priority than fiscal stability, unemployment or inflation,” says UNISDR in a paper titled ‘Towards a Post-2015 Framework for Disaster Risk Reduction’ while suggesting that “It is essential to continue to harmonize, integrate and embed disaster risk reduction within poverty eradication and sustainable development policies and programmes.”

So, apart from taking measures to save lives of the disaster prone communities, India has to integrate disaster risk management as a component of development planning and poverty eradication programmes.

As observed by UNISDR, involvement of communities, and more in general the adoption of a participatory approach to risk management, could be the most cost-effective and sustainable mechanism for reducing risks.
…………………………….
* Basudev Mahapatra is a Bhubaneswar-based senior journalist. He edits an online news and feature portal and worked as the editor-in-chief, Naxatra News TV Channel. He can be reached by mail at [email protected]