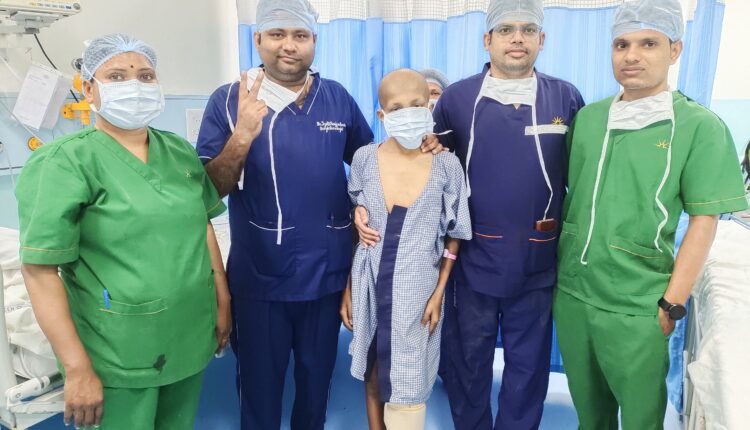 Cuttack: For the first time in Odisha, doctors at HCG Panda Cancer Hospital here performed a Lower Limb Salvage Surgery on 13-year-old boy suffering from Osteosarcoma (cancer that begins in the cells that form bones) in the left lower leg. The surgery helped the surgeons preserve the limb by removing the part of the affected bones and replacing the same with prosthetics.

When 13-year-old Chandra (name changed to protect his privacy) was diagnosed with this condition, his parents were devastated. Hailing from a lower-socio economic family, they did all they could to find a cure for their son’s condition, only to be told that the youngster’s leg needed to be amputated to save his life if not, he had to be referred to a high end hospital with advanced technologies, which would cost high, leading the family to a financial burden.

Unable to meet his medical expenses but with a ray of hope, the couple consulted Dr. Jyoti Ranjan Swain. Moved by the plight of the family and the young boy, Dr. Swain took the case as a challenge and he along with Dr.Kshitish Mohanty, and Anaesthesiologist Dr. Tapan Kumar, assessed Chandra’s condition, intending to save his leg and restore a better quality of life, by performing Limb Salvage Surgery.

Assured by a team of doctors, the parents agreed to the treatment. Under the watchful eyes of Dr.Susanta Kumar Paikaray, the patient was started on Neoadjuvant Chemotherapy to reduce the size of the tumour before going for surgery.

Explaining about the patient’s condition, Dr. Kshitish Mohanty said, “After four sessions of chemotherapy, we repeated MRI and PET-CT scan. Fortunately, the bone tumour was on the tibia, one centimetre below the knee, and didn’t affect the neurovascular and other critical structures. The tumour’s length was 16 to 17 cm, and the blood vessels were not involved. Hence, it was decided to perform the Limb Salvage Surgery – that not only removed the tumour but replaced the bone and total knee with prosthetics.”

During the procedure, the surgeons made a 19 cm incision along the tibia (leg bone) to remove the tumour, adjoining bone, and the tissues around it. This was later replaced with a prosthesis. If the tumour had exceeded even by a centimetre or if there was any involvement of blood vessels or nerves, it could have led to fatal consequences. The team of doctors studied the condition and each image carefully and worked together to give a new lease of life without any disability.

Dr. Jyoti Ranjan Swain said, “For the first time in Odisha, a lower limb salvage surgery has been performed on a teenager to remove a massive tumour in his leg and this is a huge achievement that made us feel proud and humbled at the same time. We as doctors felt super satisfied and happy witnessing the smiles on the faces of Chandra’s parents. Chandra will soon be walking without any assistance, and we are hopeful for his bright future.”

Thanking the doctors, Rekha, the patient’s mother said, “Our son had been struggling with this tumour in his leg and doctors at several hospitals stated that amputation was the only way. We visited HCG Panda Cancer Hospital with minimal hopes, but Dr. Jyoti and his team made this possible and provided a new lease of life to Chandra. I would like to thank Dr. Jyoti, Dr. Kshitish and the entire team at HCG for helping my child get back on his feet.”

The patient, after the surgery, recovered fast and was started on rehabilitation programs like walking with assistance and physiotherapy from the very next day of the procedure. If one experiences the typical symptoms of cancer – like intense pain, palpable lumps, fatigue, or unintentional weight loss- do see the nearest doctor immediately.