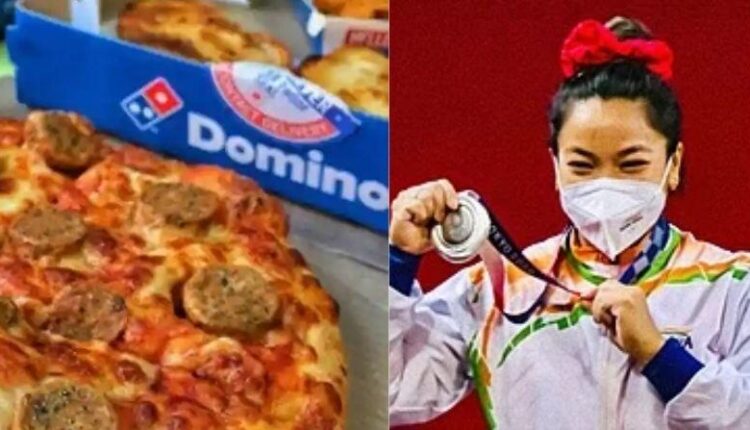 Tokyo/Bhubaneswar: Indian weightlifter Mirabai Chanu bagged a historic silver medal in the women’s 49kg weightlifting at the Tokyo International Forum in the ongoing Olympics in Japan.

Mirabai, ranked third in the world, had a total lift of 202kg with 87kg in snatch and 115kg in clean and jerk. This is India’s second medal in the sport after Karnam Malleswari’s bronze in the 69kg category at the 2000 Sydney Olympics.

Soon after her accomplishment, Mirabai, speaking to the media, said that she cannot wait to treat herself to some pizza.

“First, I am going to have a pizza. It has been a long time since I have not eaten one,” Mirabai said. “And I have waited for this day for a long time, so first I’ll have a pizza,” she added.

Her comments went viral on social media and soon reached Domino’s Pizza who took to their Twitter handle to announce that they will provide Mirabai with free pizzas for life.

“Mirabai Chanu, Congratulations on bringing the medal home! You brought the dreams of a billion+ Indians to life and we couldn’t be happier to treat you to FREE Domino’s pizza for life. Congratulations again!” wrote Domino’s Pizza on Twitter.

@Mirabai_chanu Congratulations on bringing the medal home! 🙌🏽🥈You brought the dreams of a billion+ Indians to life and we couldn’t be happier to treat you to FREE Domino’s pizza for life 🍕😊
Congratulations again!! #DominosPizza #PizzasForLife #Tokyo2020 #MirabaiChanu https://t.co/Gf5TLlYdBi

The 26-year-old Mirabai was deemed as a medal prospect for India at the Olympics which opened on Friday after a one-year delay due to the COVID-19 pandemic. In the lead up to the Olympics, Mirabai had set a new world record in clean and jerk (119kg) in a bronze-medal show of 205kg, at the Asian Championships in Tashkent in April this year.