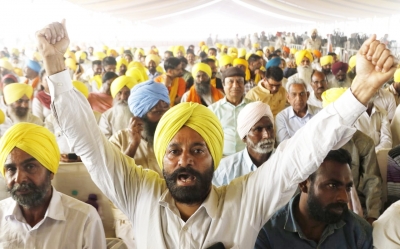 Khatkar Kalan: Donning traditional ‘basanti’ turbans and stoles, tens of thousands of people, comprising women and the elders, on Wednesday morning started converging ahead of AAP Chief Minister-designate Bhagwant Mann’ swearing-in ceremony in this village of legendary freedom fighter Bhagat Singh, who laid down his life for country’s Independence.

Officials expect a gathering of some 4,00,000 audience for the oath of Punjab’s 18th Chief Minister.

Bhagwant Mann to meet Kejriwal in Delhi today, invite him for oath ceremony

Mann’s ex-wife Inderpreet Kaur and both their two children, Seerat Kaur and Dilshan Manna, have flown all the way from the US to attend the ceremony. They were separated in 2015 after which the children shifted to the US with their mother.

The ‘pandal’ of the venue with yellow drapes and 1,00,000 chairs has been set up on 40 acres near the Bhagat Singh memorial.

In an appeal, Mann has requested the people across the state to reach Khatkar Kalan, some 80 km from the state capital Chandigarh on the highway to Jalandhar in Nawanshahr district, for the swearing-in ceremony by wearing ‘basanti’ (yellow) turbans and draping yellow shawls or stoles.

“We will colour Khatkar Kalan in ‘basanti rang’ that day,” Mann said in a message.

What is the relevance of ‘basanti’, the colour of spring?

A ‘basanti’ turban or ‘dupatta’ is associated recently with a year-long agitation of farmers against now repealed three farm laws, but also with sacrifice and patriotic spirit. Also the colour signals celebrations, a springtime kite-flying festival.

Activists inspired by the thoughts of Shaheed Bhagat Singh were shouting slogans ‘Inquilab Zindabad’ at the venue. Many of them were seen carrying a photo of the freedom fighter.

AAP registered a landslide victory, winning 92 seats in the 117-seat Punjab Assembly. Mann, who was contesting from Dhuri in Sangrur district, won by a margin of 58,206 votes.

With the deployment of over 10,000 security personnel, the oath-taking venue spreads over 150-acre.