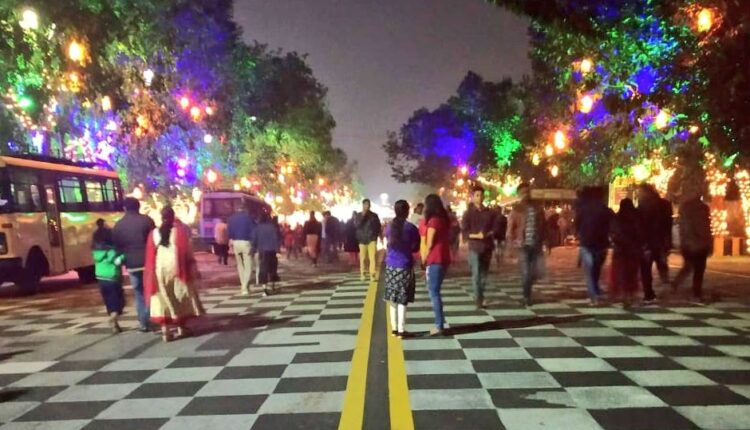 Bhubaneswar: With Odisha capital being all set to host the Hockey World Cup next year, the city will witness the second edition of .Fest in January 2023.

A review meeting in this regard was held under the chairmanship of Development Commissioner with the presence of senior officials from all concerned departments.

There were four major action points identified and assigned to related govt agencies as part of the preparation for .FEST and the makeover of the city. It has been decided to improve the Priority Road Network (PRN) comprising of around 80 KM roads along major landmarks & priority areas in Bhubaneswar.

Similarly, it was decided to ensure no digging of roads to be conducted by any agency & department especially WATCO, GAIL & internet service providers starting from 1st Dec 2022 without prior approval from the BMC. The elements like Night bazar & city beautification works are to be supported by Handlooms Textile & Handicrafts Dept. and Odia language, Literature & Culture Dept.

A decision was taken that in the meeting to form an Executive Committee for City Festival & Beautification under the chairmanship of VC‐BDA. Senior officials from BMC, Works dept., DoT, DSYS, Police dept., BSCL, TPCODL, WATCO, NHAI and OFDC shall be part of this committee.

Bhubaneswar had hosted the World Cup Hockey in the year 2018 with a dedicated city festival celebrating food, entertainment, art & trails. The city had gone festive for the last time in 2018 before experiencing Fani in 2019 and Covid since 2020. Hence, the second edition of .FEST is designed to celebrate city as an urban tourism destination. The fest shall have components like Photo exhibition & Installations, City trails, Heritage Walks, International Food festival, Food Truck Carnival & flee night market to bring the festive vibe in the city for 15 days.

“Night bazaar and BhuFeSto (Bhubaneswar Story‐telling Festival) are going to enthrall the visitors from across the globe and help them know Odisha better, said Vice Chairperson BDA, Shri Balwant Singh. He also added, the .FEST 2023 have plenty to offer in the form of entertainment and performances. “We have planned to accommodate traditional performing art forms of Odisha along with music and band performances from the state to run for 15 days. There shall be weeklong star nights of various artists of international repute,” added VC, BDA.

The meeting also had focus on organizing the STAMP (Street art and mural project) in a more holistic way by involving various art colleges in the city and state. It was decided to onboard artists of national and intrnational repute in consultation with Central & State Lalitkala Academy on things like development of art works, wall paintings, sculptures & murals, etc. at select public spaces.

“We are very much committed to make it a community driven festival from ideation to execution and urge the citizens of the city to own their own city festival”, added VC BDA. The citizens are requested to ensure complete cleanliness & discipline in hosting the World Cup & .FEST, he further added.

“BDA as part of its preparation have already floated the tender to onboard an event management agency of national repute to curate and execute the city festival”,said Shri Kabindra Kumar Sahoo, Secretary BDA.

Similarly, Bhubaneswar Urban Knowledge Centre, a unit of BDA has closely been working with BMC and other key agencies on designing various place making initiatives across the city as part of city beautification on priority.