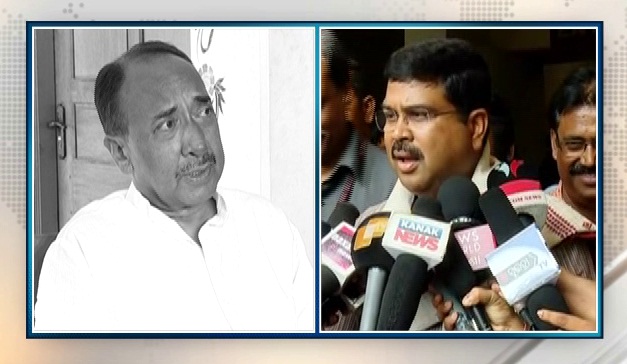 All is not well within Odisha unit BJP as two stalwarts of the saffron party are at loggerheads over Odia youths not getting priority in jobs at IOCL refinery project at Paradip.

In a letter to party colleague and Union Petroleum and Natural Gas Minister Dharmendra Pradhan, senior BJP leader Bijoy Mohapatra has raised concerns over Odias not getting jobs at the refinery project.

“The dreams of the educated unemployed Odia youth remain shattered. Outsiders have taken over. Truly, the party cadres have lost their moral to fight and they have no answers,” Mohapatra said in the letter.

The firebrand leader launched another attack on the Union minister saying: “Right from direct employment to indirect ones like contract work, labor, transport of goods are all being cornered or awarded to people and agencies outside Odisha. Locals with the same qualification are left in the lurch. Even truckers or tankers are engaged from outside the state. A number of daily wagers too are from outside Odisha. One Nagaland firm has been engaged to transport gas from IOCL to different parts of India.”

When Pradhan was asked about the issue, he parried the queries saying “this is a very good proposal”.

Reacting to the development, BJP leader Golak Mohapatra held a press conference where he asked Bijoy whether he is working for unemployed Odia youths or BJD?

While the issue is snowballing into a controversy, ruling BJD too jumped in to stoke fire.

“I thank Bijoy Mohapatra for raising IOCL recruitment issue. Keep aside the issue of jobs to Odia youths. Even wages are not being paid properly to Odia labourers working at the refinery project,” BJD leader and Paradip MLA Damodar Rout said.