Driving motorcycle in chappal not a good idea. You might get challaned 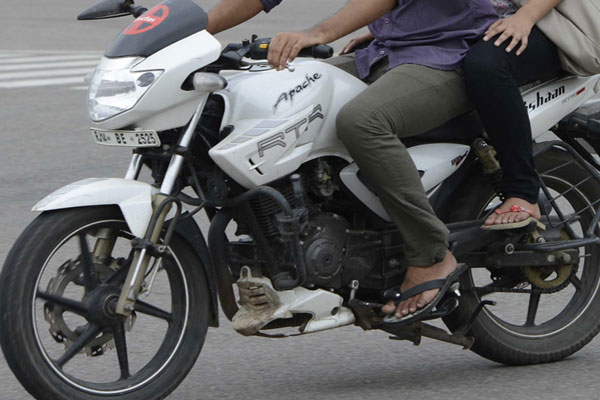 Bhubaneswar: Would you have guessed that riding a motorbike with your chappals on, could make you a traffic rule violator?

You heard that right. Riding two-wheeler motorbikes in chappals, sandals or floaters is a violation of traffic rules and for that, one could be penalized Rs.1000. This is because, these kinds of footwear have low grip. So, they increase the chances of accidents on the road by letting the riders’ legs slip while crossing a slippery road or shifting the bike’s gears.

This apart, there are four other lesser-known traffic rules whose violation could lead to fine or penalty. They are:

The traffic police will charge you with a fine or penalty if you are found in possession of more than one DLs, even if they are from different states. So, make sure you have only one DL issued by your name and carry it with you when you hit the road. In case, your DL is nearing its expiration date, renew it on time.

There’s quite a legitimate reason why ambulances and fire brigades etc are termed the ‘emergency vehicles’ . When they go out blowing emergency sirens, they are on a mission to save lives. So, out of civic responsibility and also by the law, anyone not giving way to an emergency vehicle is considered a traffic rule violator and could be pressed with penalty of almost Rs 10,000 and, in some cases, six months’ imprisonment.

A person found talking over mobile phone while driving could be charged with up to Rs 5000 penalty. However, if one is using the device for route navigation purposes, they might be allowed for the same, provided, the manner of usage doesn’t hinder the concentration of the driver.

If you are not feeling fit, be it mentally or physically or even both, it’s better to not drive at that moment. Because, if a traffic personnel finds you in either of these conditions, you will be penalized with Rs. 1000. Of course, that’s for violating first time. If you are caught doing the same again, the penalty will increase to Rs 2000.

Much annoying as traffic regulations seem to some people, it also is how majority of accidents or other casualties are averted on the road on a daily basis.  That’s why traffic rules need to be followed to ensure our own safety but also that of others around us.

So, next time you are out for a ride, make sure you abide by all these traffic rules.