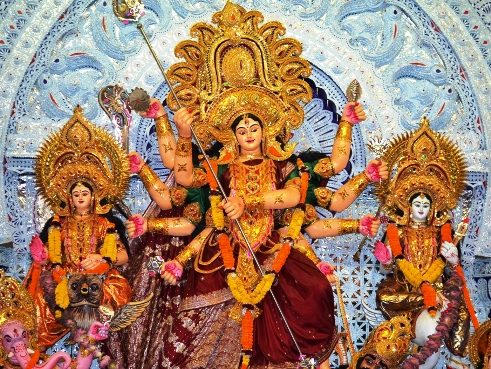 Durga Puja celebrations have picked up pace in the twin cities of Odisha — Bhubaneswar and Cuttack — with people thronging the pandals to seek blessings of Goddess Durga.

More than 300 major puja pandals and innumerable smaller ones in Cuttack and Bhubaneswar have come alive with stunning decorations and sparkling lights. People are moving from pandal to pandal to seek and admire the puja decorations created on different themes.

People were also seen shopping in malls and enjoying delicacies at eateries across the twin cities.

However, weather may play spoilsport during Durga Puja celebrations as the Indian Meteorological Department has forecast rainfall in the wake of an upper air cyclonic circulation formed over the Bay of Bengal.

“The rainfall would continue till October 10. However, there would be moderate rainfall with intervals,” said Bhubaneswar Met Office Director Sarat Chandra Sahu.

To ensure an incident-free Dussehra, the commissionerate police have tightened security in the twin cities.

Police Commissioner Y.B. Khurania said the police has made elaborate arrangements for vehicular traffic management and upkeep of law and order situation during the puja and idol immersion.

While police aid posts were set up at different places, patrolling also has been intensified. The Quick Reaction Team (QRT) and Striking Force have also been stationed, he added.

To keep a close watch on anti-social elements, CCTV cameras have been installed at strategic points, including at the puja pandals. Surveillance is also being maintained in crowded market places, hotels, restaurants and malls.
(IANS)

This video on timeless charm of Bhubaneswar is sure to give…