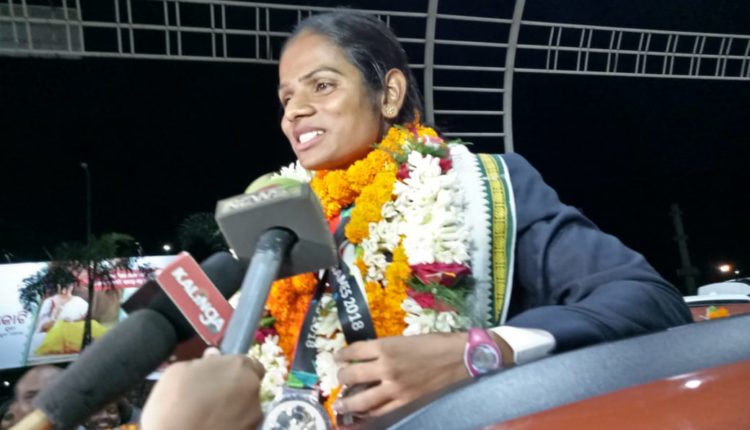 Bhubaneswar: Odisha-born ace sprinter Dutee Chand, who brought laurels for the nation and the state by clinching two silver medals at the 18th Asian Games, reached Bhubaneswar this evening amid a rousing welcome by her fans and sports enthusiasts at the Biju Patnaik International Airport here.

Dutee was later escorted to the State Secretariat where Chief Minister Naveen Patnaik felicitated her.

The CM also presented her a cheque of Rs 3 crore, a cash reward which was announced by Patnaik after her achievements at the Asian Games.

Also read: My next target will be sub-11s: Odisha sprinter Dutee Chand.

Notably, Dutee had won two silver medals in the 100 metres and 200 metres events as she became the first Indian woman after P.T. Usha (in 1986) to get two sprint medals in a single edition of the quadrennial continental Games.

The Odisha athlete clocked 11.32 seconds in 100 metres event to earn the silver as India got a medal in this category after a gap of 20 years. She missed gold medal by mere 0.02 second as Bahrain’s Edidiong Odiong timed 11.30 seconds to win the race.

Similarly, Dutee clocked 23.20 seconds in 200 metres event to finish behind Bahrain’s Edidiong Odiong, who claimed the gold medal in 22.96 seconds.

[Watch] Waqar Younis apologises for ‘namaz in front of Hindus’…

Fishing ban in Odisha from Nov 1 for conservation of Olive…