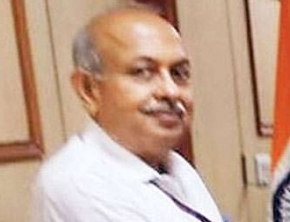 New Delhi: The tenure of Enforcement Directorate chief Sanjay Kumar Mishra, an Indian Revenue Service officer of 1984 batch, has been extended for another year.

His four-year-long tenure in the ED was to be completed in November 18 this year but he has been given another stint as head of the Central anti-money-laundering probe agency.

Last year, the Central government had brought an ordinance to amend the Central Vigilance Commission Act, through which Mishra’s tenure was extended till November 18, 2022.

Earlier, the EDs Director’s tenure was of two years, but now it can be extended upto five years. This is the fifth time when his tenure has been extended.

Earlier posted with Income Tax Department, Mishra was appointed the Principal Special Director of the ED on November 19, 2018. A few days later, he was made the Director.

During his tenure in the ED, Mishra has looked after a number of high-profile cases such as those involving Yes Bank’s Rana Kapoor, former ICICI Bank CEO Chanda Kochhar’s husband Deepak Kochhar, and Vijay Mallya.

Under Mishra’s tenure, Christian Michel James, one of the prime accused in AgustaWestland chopper scam was brought to India, which was a major break through in the case.

Mishra is presently handling the controversial National Herald case in which the Gandhi family are involved.