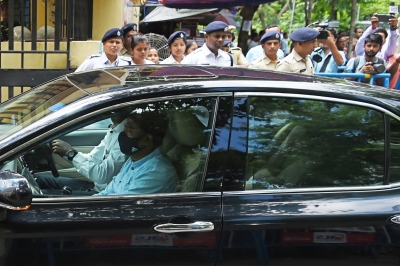 Kolkata: Over five hours have passed since the Enforcement Directorate (ED) began questioning Trinamool Congress national General Secretary Abhishek Banerjee in connection with the coal smuggling scam on Friday, and sources said the ED sleuths have noted a number of conflicting statements on his part.

ED sources said that questioning started a little after 11 am and at 2 pm, Abhishek Banerjee, who is the nephew of Chief Minister Mamata Banerjee, was allowed a lunch break of 45 minutes.

After the lunch break, a fresh round of questioning started which was going on till the filing of this report. It is learnt that Friday’s questioning is mainly related to certain transactions in bank accounts purportedly held by Abhishek Banerjee, his wife Rujira Narula Banerjee and his sister-in-law Maneka Gambhir.

Incidentally, the ED is supposed to question Maneka Gambhir on September 5.

Meanwhile, a comment made by Bengal BJP President Sukanta Majumdar led to speculation of possible tough action by the ED against Abhishek Banerjee on Friday itself.

“Something major might happen today. Keep on watching. Now I feel that Congress and CPI(M) leaders will swallow their own allegations that the BJP and Trinamool Congress are in an understanding over this probe,” Majumdar said.

Trinamool spokesman Kunal Ghosh said that such a comment from Majumdar is a proof that either the central agencies are acting as desired by the BJP, or the saffron leaders are aware in advance of the next possible actions of the agencies.

“How can he make such a statement,” Ghosh asked.