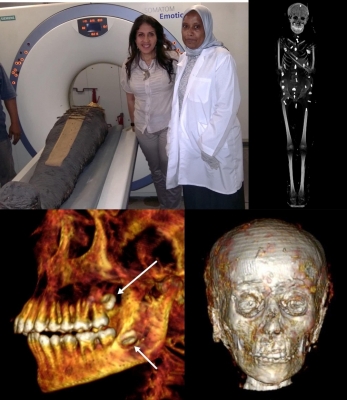 Cairo: Egyptian researchers have discovered a total of 49 precious amulets on and inside a 2,300-year-old mummy, some of which were made of gold, by using computerised tomography scans to digitally unwrap the remains without disturbing them, the Ministry of Tourism and Antiquities said.

The fully wrapped mummy, belonging to a 15-year-old boy buried in a late Ptolemaic cemetery at around 300 BC, was found in Edfu city in Aswan province, in 1916 and has been stored at Cairo’s Egyptian Museum ever since, Xinhua news agency quoted a Ministry statement as saying on Tuesday.

Its examination process didn’t start until 2015, nearly a century after it was discovered.

Through CT scanning, the researchers at Cairo University conducted non-invasive “digital unwrapping” that revealed a well-preserved mummy, according to the results published in the scientific magazine Frontiers in Medicine.

The scanning detected a high-quality mummification process that included brain and viscera removal, while the heart remained in the chest as a spiritual symbol, the results showed.

Among the 49 detected amulets, 30 were made of gold while the others of faience, stones, or fired clay, said the statement.

All these amulets were beautifully stylised in a unique arrangement that represented the power of different Egyptian gods and afterlife beliefs, said Sahar Selim, one of the researchers.

Selim added that the amulets included the eye of Horus, the scarab, the Akhet amulet of the horizon, the placenta, the Knot of Isis and others.

Among them, a golden tongue leaf was found inside the mummy’s mouth, a two-finger amulet next to its uncircumcised penis, and a golden heart scarab inside its thoracic cavity.

According to ancient beliefs, the golden tongue was placed in the mouth to ensure he or she could speak in the afterlife, and the same with the heart to proceed life, Ahmed Amer, an Egyptologist, told Xinhua.

The amulets placed on and inside the body indicated a high-socioeconomic status of the boy, the statement said.

White sandals had been placed on his feet, while his body was wreathed with ferns.

According to the ancient Egyptians’ ritual Book of The Dead, the deceased had to wear white sandals to be pious and clean before reciting its verse.

Based on the new findings, the Egyptian Museum has decided to display the mummy inside its main hall under the moniker “Golden boy”.