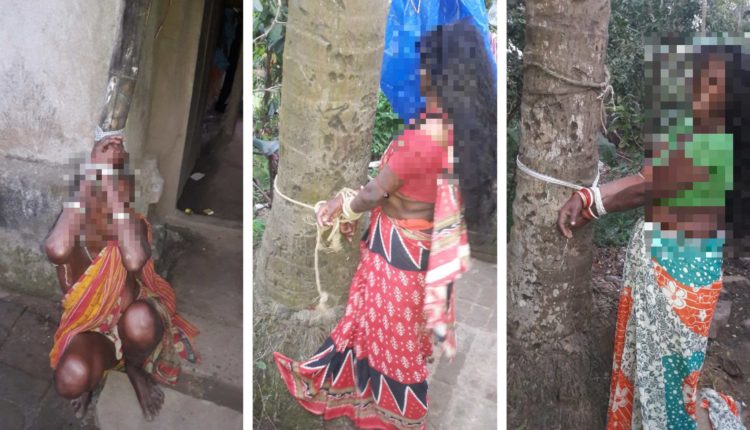 Jagatsinghpur: In an instance of barbaric act for property, two youth crossed all their limits to torture their elderly mother and two sisters by allegedly assaulting the trio outside home in presence of villagers.

The incident occurred at Hasina village under Kujang police limits in Jagatsinghpur district on Tuesday afternoon.

A long-standing property dispute among four children of late Nabaghan Tarai is said to be the prime reason behind the incident.

According to reports, Nabaghan had sold half of his house property to his two daughters as his two sons Bijay Tarai and Gajendra Tarai failed to look after him and his wife Haramani at old age. Following it, the relationship with two sisters Anima and Puspalata Samal went sour and many a time they got indulged into squabble over the issue.

The incident took place when two brothers started construction of a toilet at the land sold to their sisters. When two sisters along with mother opposed to it, Bijay and Gajendra tied them to two trees and a pole and started beating them up with a wooden handle of spade.

Shockingly, the villagers, who were present at the site, turned into mute spectators. Neither did they extend helping hand to rescue the victims, nor hindered the duo from thrashing their kin.

Later, Anima’s son informed the police who rescued the victims. Based on a written complaint by one of the victims, police arrested two accused siblings.