She was later admitted to the hospital by block officials as her kin refused to turn up fearing similar treatment in the village. 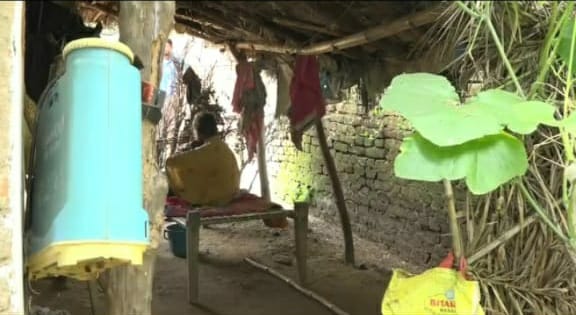 Birmaharajpur: In a shocking incident, an elderly woman not just faced ostracisation by villagers but was also abandoned by family members after she showed symptoms of suspected leprosy in Birmaharajpur block of Odisha’s Subarnapur district. The woman, identified as Sita Mahananda of Mahulpali village under Kenjhariapali panchayat, was later admitted to the hospital by block officials as her kin refused to turn up fearing similar treatment in the village.

Sources said Sita, wife of one Dhana Singh Mahananada, had been diagnosed with diabetes over one and a half years back. But she could not avail treatment due to acute poverty. As her medical condition worsened, Sita developed sores on her leg. When the wounds got bigger, family members started suspecting it to be a case of leprosy and confined her to a room in order to minimise contact.

Villagers said Sita has two sons and three daughters. Her elder son Kasta Mahanda stays in Kadodara village with his wife and in-laws. Her younger son Surubabu along with his wife used to stay with them. Surubabu is a migrant labourer and has left his wife at her parental house before leaving. Sita’s husband was tending to her initially but has reportedly left her and is staying with the elder son for the last two months as he fears villagers would ostracise him and the family due to his wife’s condition.

Initially, neighbourers give Sita food when they saw her alone. But when her condition became worse, they suspected that she has leprosy and distanced themselves over fears of contracting the infectious disease.

On getting information, Birmaharajpur block development officer Motilal Sulia and block vice-chairperson Narayan Luha along with other social activists admitted her to the sub-divisional hospital while appealing to the district administration to lend assistance for her treatment. None of her family members however turned up at the hospital.

Doctors informed that Sita’s condition is currently stable. The incident however has raised serious concerns in the taboo and deep-rooted stigma that leprosy disease continues to face even in current times.