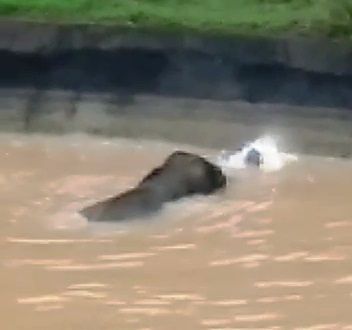 According to reports, the jumbo fell into the canal after attacking and injuring one Panchanan Sahu of Chandpur village while he was working at a farmland around 7.30 am. The pachyderm’s repeated attempts to come out of the canal yielded no fruitful result due to high water current.

On being informed by locals, Forest Department officials reached the spot and launched an operation to rescue the elephant. However, the elephant came out of the canal on its own after an hour-long effort.

The animal then attacked Mantri Roul of Barihapur village leaving him critically injured. He was admitted to the District Headquarters Hospital for treatment.

Forest officials were trying to ward off the elephant from the area, reports said.