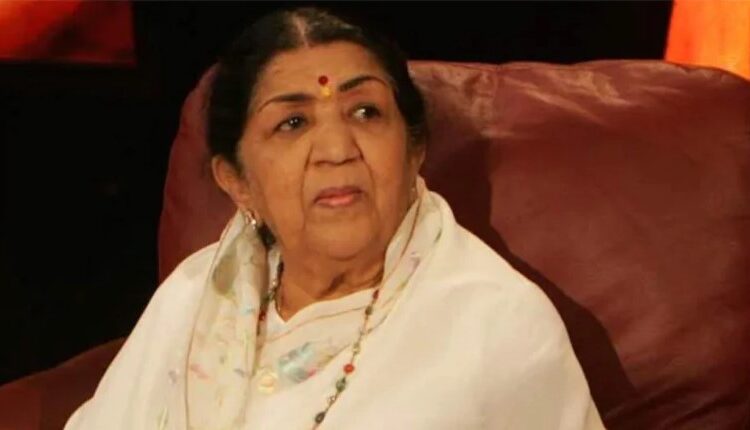 Bhubaneswar: It’s end of golden era as the music maestro and India’s Nightingale Lata Mangeshkar is no more. However, her mesmerizing voice will keep her alive in millions of hearts.

Heartfelt condolences poured in from different quarters across the country for ‘Ageless Voice of India’ Bharat Ratna Lata Mangeshkar following demise of the legendary singer.

Prime Minister Narendra Modi led the nation in mourning the death of ‘Nightingale of India’ Lata Mangeshkar, who succumbed to multiple organ failure after battling with COVID-19, pneumonia and other related issues in past 28 days at the Breach Candy Hospital, Mumbai, on Sunday.

I am anguished beyond words. The kind and caring Lata Didi has left us. She leaves a void in our nation that cannot be filled. The coming generations will remember her as a stalwart of Indian culture, whose melodious voice had an unparalleled ability to mesmerise people. pic.twitter.com/MTQ6TK1mSO

Lata Didi’s songs brought out a variety of emotions. She closely witnessed the transitions of the Indian film world for decades. Beyond films, she was always passionate about India’s growth. She always wanted to see a strong and developed India. pic.twitter.com/N0chZbBcX6

I consider it my honour that I have always received immense affection from Lata Didi. My interactions with her will remain unforgettable. I grieve with my fellow Indians on the passing away of Lata Didi. Spoke to her family and expressed condolences. Om Shanti.

Union Minister for Road Transport and Highways, Nitin Gadkari, was among the first to meet the bereaved family at the hospital following her departure. He described demise of Lata Mangeshkar as an ‘irreparable loss’ to the country.

Expressing his deep grief over death of Lata Mangeshkar, Patnaik wrote said that she will live through her melody of eternity.

Deeply saddened to know about the passing away of legendary singer #LataMangeshkar. The ‘Melody Queen of India’ leaves a void in our collective consciousness. She will live through her melody for eternity. My thoughts & prayers are with the bereaved family & her countless fans.

Bollywood fraternity mourned the death of the legendary singer, who had lent her voice to more than 25,000 songs in her over seven decades long career.

Filmmaker Boney Kapoor in a note on grief said that Lata Mangeshkar had left behind a huge legacy of songs which will be treasured for generations to come.

Deeply saddened by the news of @mangeshkarlata Ji’s passing away. She leaves behind a huge legacy of songs which will be treasured for generations to come.May her soul rest in peace. Condolences to the family. #NightingaleofIndia #LataMangeshkar pic.twitter.com/svW9iZsQb4

For singer and music composer Vishal Dadlani, the demise of Lata Mangeshkar was not acceptable.

Hoping against hope that this is not true. If it is….I dont even have the words to express the loss and grief. #LataMangeshkar ji ki awaaz India ki pehchaan hai, aur hamesha rahegi. pic.twitter.com/nmCWeWdRhr

Visiting the memory lane, he wrote, “She called me during the last Indian Idol season. She was full of laughter & joy when talking about music. I’m broken at the thought of thst chat with her. So grateful for all that #LataMangeshkar ji taught me and every musician in India, and that I got to thank her in person.”

He appealed to the journalists not to ask him about demise of Lata Mangeshkar. “I feel like the source of our music, the very notes of Music itself have fallen silent. At a time like this. what words can I find for you?” he tweeted.

Meri Awaaz Hi Pehchaan Hain, Gar Yaad Rahe…and how can one forget such a voice!
Deeply saddened by the passing away of Lata Mangeshkar ji, my sincere condolences and prayers. Om Shanti 🙏🏻

Actor Ajay Devgn in a tweet wrote: “An icon forever. I will always savour the legacy of her songs. How fortunate were we to have grown up listening to Lataji’s songs.”

In a tribute to Lata Mangeshakar, former cricketer Virender Sehwag said, “The Nightingale of India ,a voice which has resonated with, brought joy and happiness to millions around the world leaves. Heartfelt Condolences to her family and fans. Om Shanti.”

Legends live for eternity! No one will ever be like her! #LataMangeshkar, tweeted parliamentarian and former cricketer Gautam Gambhir.

Veteran singer Lata Mangeshkar breathed her last at 8.12 am on Sunday after a 28-day-long prolonged battle with Covid-19, pneumonia and related issues, a spokesperson for Breach Candy Hospital said today.

Rashmi Thackeray, wife of Chief Minister Uddhav Thackeray, Nationalist Congress Party President Sharad Pawar, Raut and others visited the hospital a short while ago to meet and condole the bereaved Mangeshkar clan.

Gadkari also confirmed that he took ‘darshan’ of Lata-Didi and recalled her legendary singing skills, her contributions to the world of music and the nation, as top leaders condoled her demise.

Lata Mangeshkar, India’s most loved singer who had once moved Pandit Jawaharlal Nehru to tears, left behind a teary-eyed nation of admirers who grew up listening to her immutable voice give wings to the words of poets and the screen careers of legions of heroines.

Popularly known as ‘India’s Melody Queen’, she had composed music for Marathi films and was a producer as well, and had the distinction of being conferred with the highest civilian honours of India and France.

Lataji was the recipient of three National Film Awards, seven Filmfare awards, and of course, the Dadasaheb Phalke Award in 1989. She was conferred the Bharat Ratna in 2001, becoming the second singer after M.S. Subbulakshmi to be so honoured, and the French awarded her the Officer of the Legion of Honour.

In 1974, Lata Mangeshkar became the first Indian to perform at the Royal Albert Hall, London. She had indeed come a long, long way since the time when the first song that she recorded for a film — ‘Kiti Hasaal’ in 1942 — was dropped in the final cut.

Born in the then princely state of Indore on September 28, 1929, to the classical singer, Marathi theatre actor and writer of musical plays Deenanath Mangeshkar and his wife Shevanti (Shudhamati), Lata Mangeshkar was originally named Hema by her parents, but they later changed it to Lata after the character Latika from one of her father’s musical plays.

Lata Mangeshkar’s association with the performing arts began when she was five and started appearing in her father’s musical plays, and it continued even after her father’s premature death in 1942, thanks to his good friend, the actor and director Master Vinayak (Vinayak Damodar Karnataki), who took the family under his wings.

It was Master Vinayak who took Lata Mangeshkar to Mumbai, paved her way into the world of Marathi cinema, got her to take Hindustani classical music lessons from Ustad Aman Ali Khan of the Bhendi Bazaar Gharana, and introduced her to Vasant Desai, V. Shantaram’s favourite music composer.

But it was not until Master Vinayak’s death in 1948 that the struggling singer-actor found the person whom she considered to be her “godfather” — the music composer Ghulam Haider, who gave Lata Mangeshkar her first big break with the song ‘Dil Mera Toda, Mujhe Kahin Ka Na Chhora’ in the movie ‘Majboor’ (1948). It was her first big break.

Haider took his protege to Shashadhar Mukherjee, the Filmistan boss now better known as Kajol and Rani Mukherjee’s grandfather, for his film, ‘Shaheed’ (1948), but he turned her down because he found her voice to be “too thin”.

And in one of life’s delicious ironies, Mukherjee’s grand-daughter lip-synced the ‘Dilwale Dulhania Le Jayenge’ song, ‘Mere Khwabon Mein’, which was sung by none other than Lata Mangeshkar, as well as the other numbers picturised on her and Shah Rukh Khan.

Since ‘Mahal’, Lata Mangeshkar was courted by just about every music director of note — from Anil Biswas to S.D. Burman (and his son Rahul Dev, whose first and last song she sang), Naushad (who had asked her to sing like the then reigning nightingale, Noorjehan), Madan Mohan, Shankar-Jaikishan, Laxmikant-Pyarelal (for whom she’s said to have sung 700 songs in 35 years), and Kalyanji-Anandji.

And she worked with every contemporary composer of note — from Anand-Milind, sons of Chitragupt, with whom she had also worked, and Anu Malik, Sardar Malik’s son, to Ilaiyaraaja and A.R. Rahman. It is said she worked with music directors from 13 states in her star-studded career.

After Noorjehan moved to Pakistan, Lata Mangeshkar became the go-to playback singer for every film producer and music composer. She did not disappoint them.

Lata Mangeshkar lent her voice to an endless succession of chart-topping numbers in Hindi cinema, from ‘Allah Tero Naam’ and ‘Rangeela Re’ to the ‘Satyam Shivam Sundaram’ title track, to ‘Lukka Chuppi’ in ‘Rang De Basanti’, apart from songs in Marathi (she also composed the music for several Marathi films in her ‘Anandghan’ avatar), Bengali, Tamil, Kannada, Malayalam, and Sinhala.

In 1974, the Guinness Book of Records listed Lata Mangeshkar as the most recorded artiste in human history, stating that she had recorded “not less than 25,000 solo, duet and chorus-backed songs in 20 Indian languages” between 1948 and 1974. The claim was contested by her long-time rival, Mohammad Rafi, who claimed to have sung around 28,000 songs.

For 73 years, from 1943 to 2015, when she recorded her last song for a film (the Indo-Norwegian production, ‘Dunno Y2…Life Is A Moment’, which was all about gay love), Lata Mangeshkar commanded a fan following and an inimitable reputation with not many parallels in the Indian performing arts.

The late Yash Chopra, who was one of Lata Mangeshkar’s favourite directors, said in an article he had penned for BBC.com on the occasion of the singer’s 75th birthday (not longer after she had sung the famous ‘Veer Zaara’ song, ‘Tere Liye Hum Hain Jiye’, with Roop Kumar Rathod): “I see God’s blessing in her voice.” We are blessed to have that voice live with us forever.