The scam targeted desperate job seekers in at least five states including Gujarat, Karnataka, Andhra Pradesh, West Bengal and Odisha where over 50,000 persons are said to have been duped worth crores. 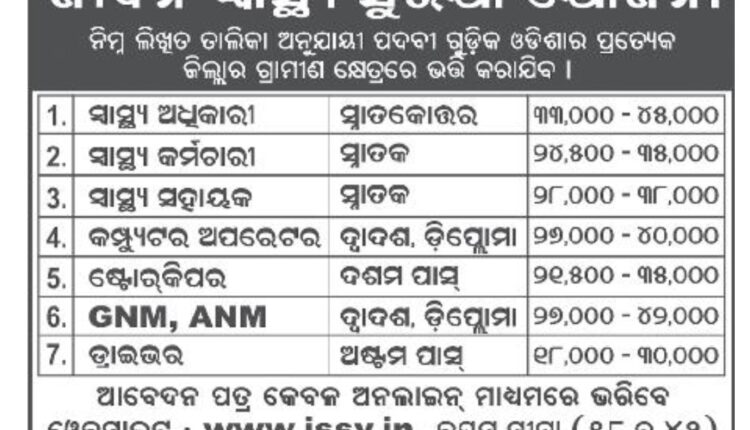 Bhubaneswar: The Economic Offence Wing (EOW) Odisha today claimed to have unearthed a huge job fraud scam which was running from Aligarh, Uttar Pradesh and arrested one person in this connection. The accused was identified as Zafar Ahmed of Civil lines, Aligarh, Uttar Pradesh, an engineer (B. Tech) by profession
and one of the main masterminds of this scam. He was produced before local court in
Aligarh and will be produced before the court at Bhubaneswar.

The scam targeted desperate job seekers in at least five states including Gujarat, Karnataka, Andhra Pradesh, West Bengal and Odisha where over 50,000 persons are said to have been duped worth crores.

The scam was reportedly being run by a group of highly tech savvy engineers from Uttar Pradesh with the help of some expert website developers. As per the EOW release, the core group was assisted by around 50 call center employees. These employees were paid Rs.15,000/- per month and were of Jamalpur and Aligarh locality of Uttar
Pradesh. More than 1000 fake SIMs and 530 handsets/ Mobile were used for this scam.

The team’s modus operandi was apparently to use only WhatsApp voice calls by using fake SIM cards as they
anticipated every move of police and law enforcement and to avoid  “true caller” detection, they ensured to mark/save their mobile number.  They maintained strict discipline not to use their personal phone to the phone used
in fraud/ scam (which they named as “Kaam wala Phone) and around 100 mule bank accounts were used in this scam.

They will withdraw money only from “Jan Seva Kendra” using the QR code of Jan Seva Kendra and mule account. There is plethora of such “Jan seva Kendra” in UP who happily gives the cash amount taking 10% commission. By such clever moves they ensured they leave no trails either through phone or bank accounts.

The scamsters would then develop the website resembling a Govt website displaying the government job advertisement mainly targeting Health or skill department jobs, some using ‘Pradhan-Mantri schemes” to attract and deceive the job seekers.  Fake employment sites would be named like “Jeevan Swasthya Suraksha Yojana”
www.jssy.in, “Bharatiya Jana Swasthya Suraksha Yojana”, www.bjsry.in, “Gramin
Samaj Manav swasthya Seva” www.gsmsss.in etc. They will charge candidates for registration to interview to training to other kinds of event ranging from Rs.3000 to 50,000 depending on to what extent candidates trust
them.

To win the confidence of candidate they insisted that they work only through their official website and would receive money from candidates in the various mule accounts only. Once they have completed the exercise suddenly the website and Call centers will go off.

The mule bank accounts were collected by the accused from Rajasthan and the SIMS
used by the fraudsters registered in the name of innocent persons. The fraudsters had been duping people since the year 2020 and have amassed a lot of property worth crores of rupees in Aligarh with the ill-gotten money.