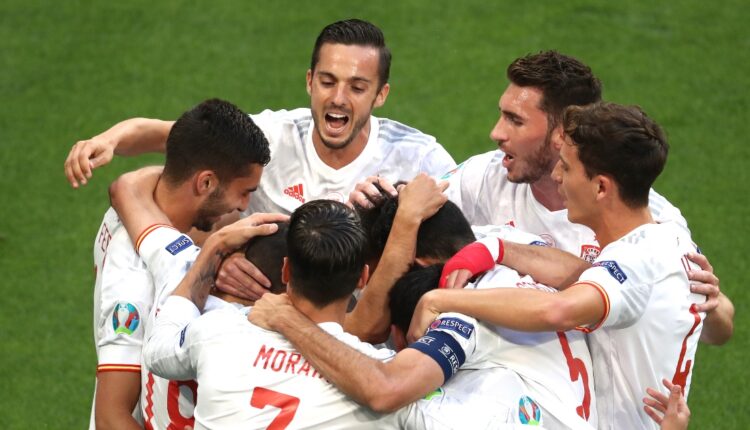 St Petersburg: Three-time European champions Spain needed to fight until the penalty shootout to see off 10-man Switzerland, reaching the Euro 2020 semifinals after a 4-2 verdict.

The teams were tied 1-1 after regulation time on Friday and the extra time too didn’t produce a result. But Spain finally wrapped it up by winning 3-1 on penalties, reports Xinhua.

Spain dominated all through in the second half but Switzerland, who stunned world champions France in penalty shootout to reach the quarterfinals for the first time, were desperate to find their way back through counterattacks.

In the 55th minute, Zakaria nearly cancelled his own goal but his shot was inches wide. Xherdan Shaqiri then nailed it as the Swiss captain calmly pushed Remo Freuler’s pass into net from close range in the 68th minute.

But Switzerland’s momentum was short-lived as Freuler was sent off in the 77th minute with a straight red card for a sliding challenge on Gerard Moreno.

Spain attacked with a vengeance, but Sommer, who blocked French strike Kylian Mbappe’s penalty shot last Monday, pushed himself forward by making amazing saves one after another.

Although Rodri also missed the target as Sommer dived to the right to block the shot, Switzerland could not kill another giant as they missed three penalty shots and Mikel Oyarzabal scored the decider for Spain.

Spain will face Italy in London’s Wembley Stadium on July 6.

Munich: Relentless Italians scored twice in the first half and advanced past Belgium 2-1 in an intense see-saw Euro 2020 quarterfinal encounter in the Football Arena Munich here.

Belgium started brightly and earned their first chance with less than a minute into the game as Italy goalkeeper Gianluigi Donnarumma had to defuse a dangerous attack from Romelu Lukaku on Friday, reports Xinhua.

Belgium were the more attacking side in the opening stages, but Italy came close to scoring with their first chance, but Leonardo Bonucci’s goal was ruled offside by VAR with 13 minutes gone.

At the other end, Donnarumma had to be on guard to deny Kevin De Bruyne’s promising strike on goal nine minutes later.

Eventually Italy broke the deadlock as Belgium failed to clear the ball from their area, allowing Nicolo Barella to slot home after shrugging off three defenders at the half-hour mark.

Italy picked up the pace and made it two on the scoreboards after Lorenzo Insigne gave the ball a couple of touches before smashing it past a hapless goalie Thibaut Courtois with two minutes remaining in the first half.

Belgium came to life just before the half-time whistle as Italy defender Giovanni di Lorenzo felled Jeremy Doku inside the box to earn a penalty. Lukaku stepped up and made no mistake to halve the deficit.

After the restart, Italy continued on the front foot while Belgium lacked penetration and ideas.

Belgium had to wait until the hour mark to create their next clear-cut opportunity, but Lukaku and Thorgan Hazard missed Nacer Chadli’s sweeping cross to the far post.

Robert Martinez’s side increased the pressure but couldn’t do much damage to Italy’s bulwark. Belgium’s golden and last chance came in the closing stages when Doku pulled a long-range effort just over the crossbar.

With the result, Italy progress into the semifinals where they will clash with Spain in Wembley on July 6.

“I don’t think we suffered too much in any moment of the game. To beat a team like Belgium you need a great performance by everybody, and this is exactly what happened today,” Italy head coach Roberto Mancini said.

“It hits hard. We had two opportunities, but their keeper made a good save and I think we gave the first goal away a bit too easily. It really could have gone either way, but Italy deserved to win here,” Belgium goalkeeper Thibaut Courtois said.