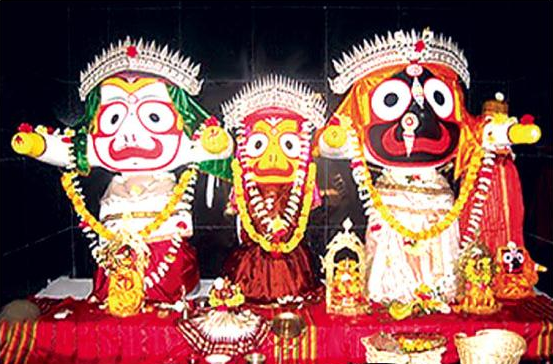 Bhubaneswar: In states and countries beyond, one of the many things people identify Odisha with is the Jagannath temple in Puri. The Jagannath cult pervades the globe and Odia communities never fail to spread the rich culture of their land and the Lord.

There are some lesser-known Jagannath temples in one of India’s most beautiful corners – North East. Odisha Sun Times has compiled some of them for its readers.

It was in 2013 that a Jagannath temple was constructed in Dibrugarh, Assam. To boost tourism, the then Governor late J B Patnaik ordered for construction of a 90 feet replica of the one in Puri. The temple constructed with concrete and a faux sandstone finish with intricate sculptures gives a feeling of an ancient temple. The greenery around adds to the beauty of this temple located in a quiet corner of the state.

The rise of Jagannath cult in Assam can be traced to Kamarupa, one of Assam’s earliest literary document, Kalika Purana, composed in 8-9th century, which mentions and glorifies Jagannath. It says that the first Brahmanical Tantric Peetha originated in Odradesa (Odisha), where the goddess resides as Odresvari Katyayani and her consort as Odresa Jagannath. Another tantric text of Kamarupa dating back to the 16 AD also includes stories about the making of wooden idols of Jagannath. Likewise, there is mention of Jagannath in Manikuta of 1680 AD and other such Assamese textual works.

Built in 1661 AD by Manikyas, Maharaja Govinda Manikya and Jagannath Deva, this Jagannath temple in Agartala is an architectural heritage. Popular as Jagannath Bari, this temple has an octagonal base with pillars crowned by square and pyramidal cones.

It is believed that the general-in-chief of Maharaja Bijaya Manikya, Daitaranya brought the idol of Lord Jagannath from Puri in the year 1560 AD. The idol so installed was later removed and shifted to Comilla (Bangladesh). While the exterior architecture is a confluence of Hemadpanthi and Arabic style, the interiors have a typical Hindu flair.

The Jagannath temple in Manipur is one of those few temples where the idols have hands with palms and fingers. Located in the capital city, it is popularly known as Govindajee temple, which is divided into two parts. While one of the two parts houses Radha-Krishna, in the other resides Lord Jagannath and siblings, Balabhadra and Subhadra. The Gambuja-shaped temple, 66 feet in height, was built by King Churachand in 1908.

Ratha Jatra is celebrated in various parts of Manipur by the Vaishnavites and other devotees. Popular belief says, Rai Vanamali, an authority on the cult of Radha-Krishna, introduced Manipur Kings to Vaishnavism when he arrived in Manipur from Shveta Ganga, Puri (Odisha), in 1703 AD. In 1832, Manipuri King Gambhira Singh started Ratha Jatra, locally known as Kangchingba, following the rituals held at Puri.