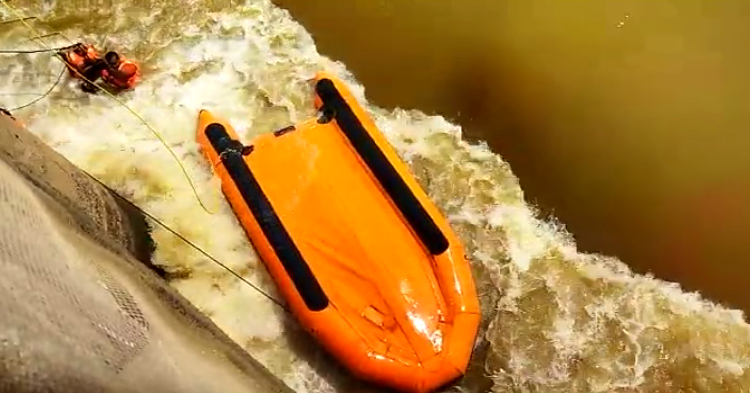 Cuttack: In a subsequent tragedy, the ODRAF boat, which was pressed into service for rescue of the stranded elephant from Mahanadi rive near Mundali barrage here, capsized in the river due to strong water current.

Two media personnel of a leading regional news channel–video journalist Prabhat Sinha and reporter Arindam Das– went missing after the ODRAF boat capsized. However, they were rescued in critical condition after a while and rushed to SCB medical College and Hospital here for treatment .

Sources said, five to six members of ODRAF were engaged in the rescue operation. The two mediapersons had accompanied the ODRAF team to cover the rescue operation. However, the boat overturned when the rescue team was trying to bring the pachyderm to the river bank. All the occupants of the boat fell into deep water. Following efforts, few of them, including the medipersons  were fished out of the water.

However, three more of ODRAF members were missing till the last report was filed.

The jumbo rescue operation was launched after the pachyderm was spotted in deep water near the barriage this morning. The tusker was swept away while crossing Mahanadi river at Athagarh in the wee hours.

Few locals first had spotted the stranded animal and raised an alarm. Later, fire personnel had rushed to spot for rescue operation. A team of forest officials from Chandaka had also headed to Mundali to join the rescue operation.