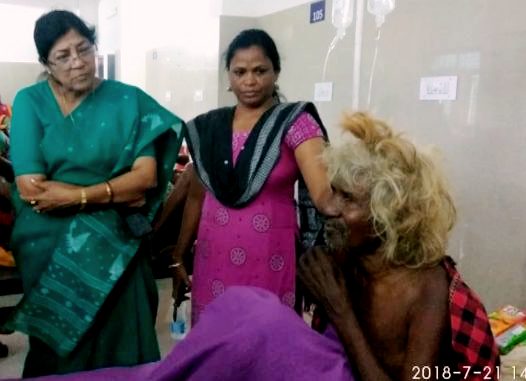 Dhenkanal: In a commendable act, an Odisha judge helped rescue an elderly man living in a thatched house in a forest here; directed the district administration for inclusion under social welfare schemes.

It came to the notice of District Legal Services Authority (DLSA) that several tribal families are deprived of the benefits of social welfare schemes owing which the Chairperson Pranita Mohanty directed the officials to intervene into the matter.

A team of DLSA officials headed by its secretary Arun Patnaik visited the tribal hamlet and interacted with the residents. The team spotted a destitute man identified as Kashinath Pradhan from Bania village under Deogaon panchayat who was living in a shanty in a nearby forest.

The frail man, seeming to be in late 60s, was rescued from inhabitable conditions and admitted to District Headquarters Hospital for treatment. The woman official, who is also the District and Sessions Judge, today visited the DHH and enquired about his health condition.

Around 85 members of 30 tribal families from Jamunalia, Sorisiapada and Totapada villages under the panchayat had complained that they do not have Aadhaar and voter ID cards, for which they are unable to avail any government benefits.

The top official of the DLSA directed the district administration to ensure that the families are included in the pro-poor schemes.

Meanwhile, the proactive action of the woman judge has become the talk of the town.