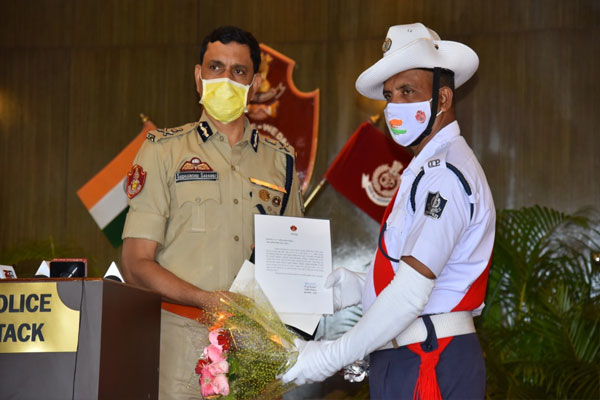 Cuttack:  A few days after a traffic cop was found sweeping gravels from the road with a broom in Sikharpur area here, the Twin City Commissionerate Police today felicitated constable Lalit Mohan Raut for his diligent service.

At a special event today, Police Commissioner Sudhanshu Sarangi presented him a citation along with a cash reward of Rs 1,000 to laud his action that checked a traffic disruption on the streets of Cuttack on Saturday afternoon.

As mentioned in the citation, Raut, during his duty hours at Shikharpur traffic square found stones and gravels scattered on the busy road. To prevent any kind of inconvenience to the commuters or  road mishap due to the gravels and stones, the on-duty cop took matters into his hands and went on sweeping the road with a broom.

While felicitating him, the CP encouraged him to keep up the good work and hold the honor of the department high.