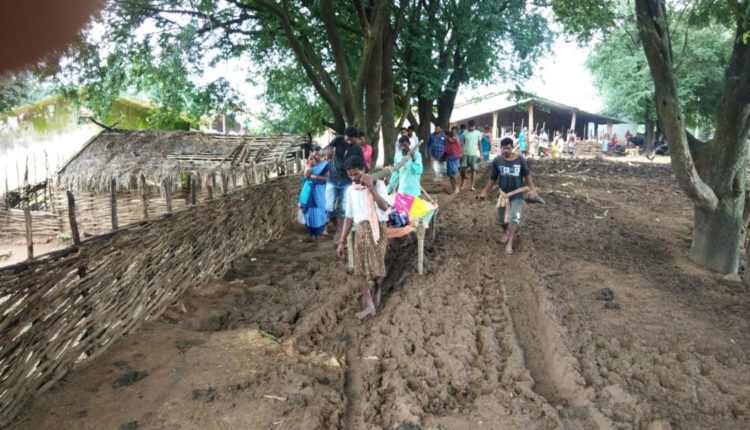 Nabarangpur: There are still many villages under Papadahandi block of Nabarangpur district where road connectivity is a distant dream. Due to lack of motorable road, hundreds of residents of these villages especially patients and pregnant women are suffering a lot.

An expectant mother of Ambidipadar village under Maidalpur panchayat was the latest victim of the poor road connectivity. She was carried on a cot by relatives up to an ambulance parked around two and half km away from her village.

According to reports, Dashei Santa of Ambidipadar village went to labour this morning. Following this, the woman’s relatives called up a ‘Janani Surakhya’ ambulance. But the vehicle could not reach the village, which was only 3 km away from the National Highway-26, due to mud filled road.

When the labour pain of Dashei became intense, her relatives and one ASHA worker decided to carry her on a cot up to Hatapada where the ambulance was waiting. Later the woman was admitted to the Maidalpur Primary Health Centre where she gave birth to a baby girl.

Hospital sources said condition of the mother and child are stable.

Meet this wonder kid from Odisha who recites Bhagabata effortlessly

Youth goes missing after taking selfie near waterfall in…