Experts deliberate on implications of West Asian geopolitics for India 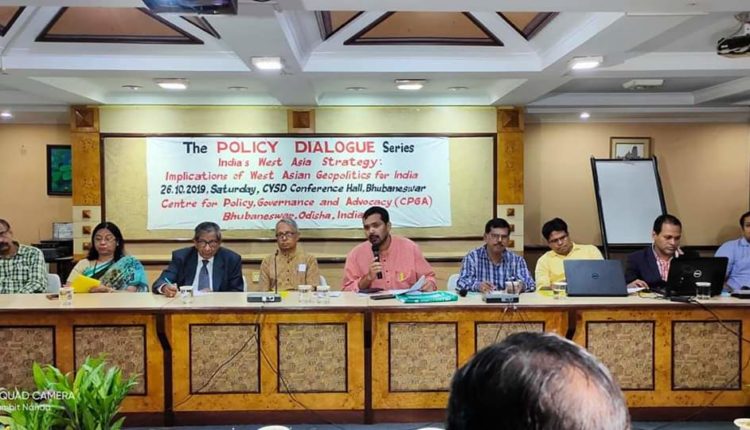 The policy dialogue convened and chaired by CPGA Chairman Tejeswar Parida, discussed elaborately the ongoing Syria-Turkey war, withdrawal of USA Army and entry of Russian Army into the war zone, Turkey’s support to Pakistan in UN on Kashmir issue and Indian Govt.’s advisory to Indian tourists not to visit Turkey, China’s growing export of Weapons to West Asian countries which was increased by 35% in last 5 years, role of ISIS, the USA-Iran conflict and relationship of India & Pakistan with Islamic countries of West Asia as being closely observed by the entire world.

The dialogue also opined that West Asia holds importance as this area has more than 50% of Petroleum reserves and about 40% of natural gas reserves which decides prices in India. Parida informed that the dialogue also raised concerns about the safety and security of more than 8 million Indians working in West Asia, the increasing terror violence, growing interference of powerful nations like USA, Russia, France, UK, China etc. in internal matters of these countries and discussed various aspects of India’s socio-economic and cultural ties with foreign investment, employment, trade& commerce opportunities with these nations.

The Chief Guest and former Indian ambassador Abasar Beuria highlighted the high dependency of India on West Asia for petroleum and energy security as 80% of oil imports are from these countries. Similarly, more than 8 million Indians working in these areas send back home more than 50 billion dollar and thousands of their families being dependent on these earnings.

The Guest of Honour Bibek Pattanayak, former Director, International Civil Aviation Organisation said that Indian Muslim Haj pilgrims visit West Asia and there are historic and cultural relations with India since long. The number of flights connecting India to this region has increased many fold while the Chabahar port in Iran has become very vital for India. Indian Aluminium Manufacturing companies can start operations in this region.

Professor Niranjan Barik, former Head of Department of Political Science and International Relations, Ravenshaw University, Cuttack appreciated the stand of Indian Govt. to condemn the attack of Turkey on Syria. He raised concerns on the movement of Armies of USA, Russia and the Kurdish fighters, also the expansion of ISIS to different areas.

Dr. Sabita Harichandan, senior Associate Professor of Political Science & International Relations found the current situation in West Asia region as having similarity with the Heartland Theory of great political scientist Mackinder and opined that the geopolitics of this region must be closely monitored for the stability in the economic and political situation of the world.

Eminent expert on foreign policy, International trade & former researcher of International relations at JNU, Prasant Kumar Sahoo strongly opined that India and China are now two emerging anchors in West Asian region. Instead of following USA or Russia model of prioritizing physical presence for political dominance, India should follow a model like that of China to focus on increasing trade and commerce with West Asian countries.

Kamala Kanta Dash, eminent foreign policy & defence expert and visiting faculty of public policy & good governance at National Law University of Odisha and Sri Sri University, Cuttack viewed that the indirect support to India on Kashmir issue by some Islamic countries of West Asia by not supporting Pakistan at International forums, Indian Prime Minister being conferred the highest civilian Award of Saudi Arab and the high potential Chabahar port of Iran that connects India directly to Central Asia, Afghanistan and Iran for trade and other commercial purposes establish the growing importance of India in West Asia.

Tejeswar Parida, Chairman of Centre for Policy, Governance and Advocacy (CPGA) informed that the detailed analysis and views expressed by the eminent foreign policy and International relations experts in this policy dialogue to be shared with the different Ministries and Departments concerned of Government of India. More than hundred intellectuals and Union Civil Services Examination (UPSC) aspirants participated in the policy dialogue and exchanged ideas in the interactive session with the experts.