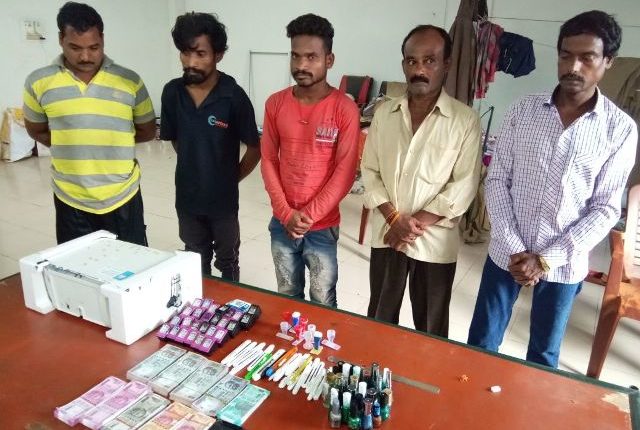 As many as five persons, identified as Rameswar Moharana (43) of Ganjam, K. Ramesh (56) of Berhampur, Pranam Bhoi (22) of Khordha, Dillip Bhoi (19) of Khordha and Sarat Sahoo (32) of Khordha, have been arrested in this connection.

According to police sources, Sarat, Pranam and Dillip were trying to exchange some fake currency notes at Mahura Bazaar under Tomando police limits here. Acting on a tip-off, quick action team (QAT) of the Commissionerate Police and Tomando Police reached the spot and nabbed the accused trio.

After interrogating the three, the cops came to know about the fake currency note printing unit in Berhampur, following which a police team went to the town and raided the place leading to the arrest of other two accused.

“In order to unearth the roots of the fake currency note racket, more investigation is required. The accused will be forwarded to court tomorrow. We will seek remand of the five for further questioning and probe,” said Twin City Commissioner of Police, YB Khurania.