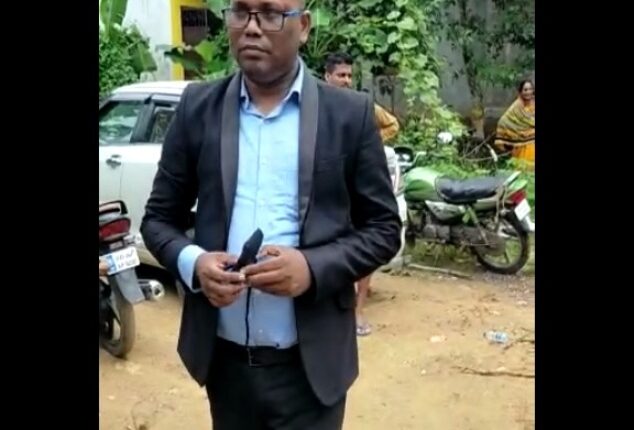 Bhubaneswar: A man posing as the director of National Bank for Agriculture and Rural Development (NABARD) was caught by locals while allegedly trying to dupe a retired government employee in Balakati area on outskirts of Bhubaneswar.

The accused has been identified as Asmit Sethy. The locals handed him over to the police for appropriate action.

Reports said that the accused had earlier duped the same person in guise of OMFED director when the victim was in service five years ago.

However, the fake official fell into his own trap laid to cheat his old target for second time.

Sources said that Asmit visited residence of Damburudhar Biswal, a retired Livestock Inspector, at Sisilo village at around 1.30 PM on Saturday in his car. Introducing himself as the NABARD director, he asked Biswal to produce his office documents for verification. But, the latter raised doubt over it as he has already been retired from the service. In the meantime, he identified the person and recollected the incident occurred with him 5 years ago. He could remember that face of the person who had duped him in guise of the OMFED director at his office when he was serving the government as the Livestock Inspector 5 years back.

The accused had allegedly defrauded him of Rs 2,500 showing error in official records. But, the duped official had not approached the police against the accused after he realised that the OMFED director was a fraud.

This time, Biswal did not repeat his past mistake and immediately informed the villagers about the fraud. Acting on it, the locals asked the fake official to show his identity card. When he failed to produce it, the locals informed the Balakati police outpost about the incident, the source said.

On receiving information, the police took him to the outpost under Balianta Police Station in Bhubaneswar Urban Police District for interrogation into the allegation.

A senior police official said that Asmit is associated with a number of NGOs. The probe has been initiated to ascertain the reason as to why he targeted the retired employee in guise of the NABARD director. As he had defrauded Biswal earlier, he is presumed to have visited his residence to trap him again with that purpose. Action will be taken against him following the investigation.

The Livestock Inspector got retired from his service on July 31. It is suspected that the fraud had laid a trap to blackmail the retired official by revealing or publicizing any ‘unknown’ mischief made by him when he was in service.