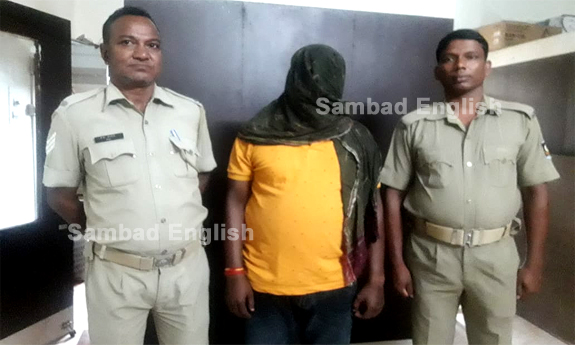 Ghatagaon: A man was arrested today for duping some local youths on the promise of employment in Keonjhar district by impersonating him as Odisha Forest Services (OFS) officer. He was identified as Sujit Kumar Padhiary from Erabanka village of Sujanpur panchayat under Bari block of Jajpur.

The accused pretended to be working as assistant conservator of forests (ACF) in the department. A number of unemployed local youths became victim of the trap laid by the fraudster. After catching hold of the man, locals beat him severely and then handed him over to Ghatagaon police.

According to an official source, Sujit had camped in Ghatagaon for the last few days and was staying in a private lodge here. He became familiar with a mobile shop owner in the town. Subsequently, he told the latter that he can give appointment to unemployed youths in exchange of financial benefits.

This raised doubts in the minds of the youths, whom Sujit had approached to provide jobs. They tried to verify the accused man’s identity and found that he was not an ACF in reality. Some of the youths asked him to come to a secluded place for receiving money and overpowered the fraudster.

Sujit is a history-sheeter and has committed similar crimes in Puri, Angul, Jajpur and Keonjhar.

A case (No-215/2022 under Sections 419 and 420) was registered in this connection and the accused Sujit was forwarded to court later in the day, Ghatagaon PS IIC Prativa Manjari Sahu said.

A detailed probe of the financial fraud and cheating is underway.