Craving for a lassi? Turn to these famed lassiwalas in Twin City 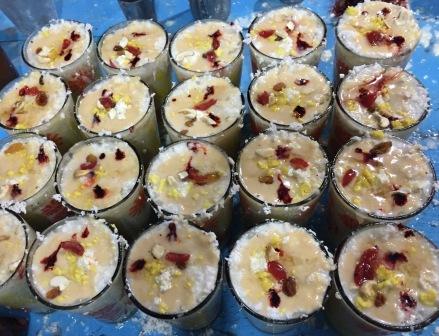 Odisha goes into a bad spin during the cruel summer months every year from March to till end of September. The unbearable heat and humidity become silent killers. Curd becomes a life-saver in many forms and  is not very expensive, so the poorest of the poor can afford drinking a glass of lassi or simple buttermilk. Lassi is all about curd in it’s thick, frothy, creamy, rich delightful form which tastes like heaven in the hot summer months.

In the twin cities of Cuttack and Bhubaneswar, a few Lassi shops that have been there for over five decades have almost become a cult image for the lassi lovers!

One of the oldest lassi stalls in Bhubaneswar, this quaint shop is famous for its dahi rabidi lassi which is made in a typical style. The curd and rabidi are churned together with a hand churner and sugar water is added to it. Artificial essence and other accompaniments like nuts, grated coconut, etc. are not used. Late Sudershan Karada alias Dadheebaba had started a small lassi stall near the Lingaraj temple, adjoining the Meghanada prachira some 50 years ago. With time he shifted the small stall to a nearby shop and now his son Bhagu runs the business. “We get more than 200 customers  who visit this shop daily and the tourists who come for the Lingaraj temple darshan make a beeline for this lassi stall to quench their thirst,” says a proud Bhagu. (Per glass-Rs 55, Rs 35 )

Harihar Sahu who initially started selling lassi in a small shanty remembers selling a glass of lassi for Rs 2, 33 years ago. Today he sells a variety of lip-smacking lassi in a huge shed behind the Durga Mandap in Shaheed nagar. The demand for sugar free lassi for the diabetic customers, dahi sarbat which is simple lassi without any addition and the dahi rabidi mix with freshly scraped coconut, nuts and bits of cherry added, is a big hit. In summer, 500 – 1000 customers visit the shop daily with family and friends to enjoy the delectable beverage. Sahu works diligently with his 15 employees churning out glasses of yummy lassis for the long line of customers waiting patiently. Approximately 600-700 litres of milk are obtained from Omfed and from milkmen in and around the capital city to make rabdi and lassi. Sahu comments that , “there are no leftovers as everything is consumed  latest by 9 pm and we use fresh milk the next day.” Harihar proudly claims that Lingaraj Lassi has made a name for itself by being consistent in quality and is now has become a household name. ( Per glass- Rs 30, Rs 40 and Rs 50)

The two-year-old lassi stall competes with the stalwarts by selling the lassi in small earthen pots known as mati handi in Odia. “Due to the eco-friendly containers, the lassi gives an earthy taste which the customers really appreciate,” says Ganesh Sahoo who owns this stall in Kalpana square. Using big matkas or earthen pots to store the lassi , Ganesh tries to cater differently to his customers. (Per glass- Rs 40)

Baidyanath, who belongs to bepari sahi in Cuttack runs this one-stop lassi stall in Buxi Bazaar, which was established by his Late father Karthik Prasad Bhagat in 1980. Initially it started as a small shop near their residence but with growth and popularity they had to shift it to Buxibazar. The famous dahi -rabidi mix is an all-time favourite and the price has gone up from Rs 10 to Rs 40 now. ( Per glass – Rs 40)

It does not need any signboard or advertisement to advertise itself as one of the best and oldest lassi stalls of Cuttack. In the last 54 years, the two brothers Giridhari and Sridhar Khuntia have made Dolamundai lassi a happening place for the lassi lovers in Cuttack. Santosh tells how the simple lassi goes through a cosmetic change with  additions of dry fruit toppings , scraped coconuts, different nuts etc. and is a treat to the eyes as well as the palette. In 1962 Giridhari sold a simple lassi glass priced at 75 paisa and now his son Santosh sells it at Rs 25 with the taste and flavour remaining as delicious as ever. (Per glass- Rs 25).