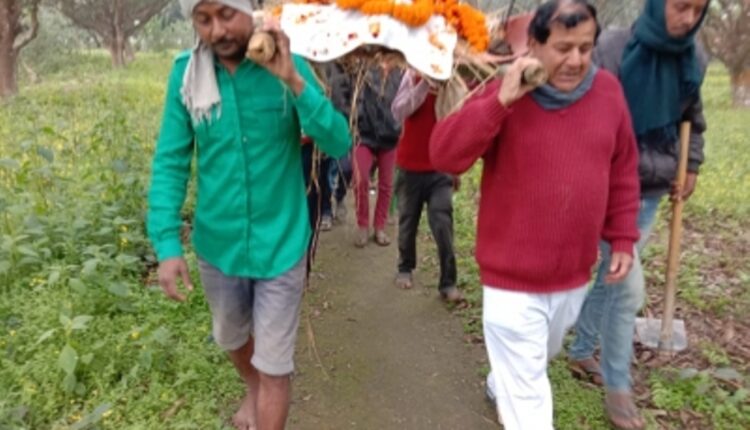 Purnia (Bihar): Dog is man’s best friend, but ask any dog-lover and he will invariably say that their pet pooches are family. Showing such love for his deceased pet dog Brownie, a family in Bihar’s Purnia district organised all funerary rituals otherwise reserved for a human before burying the deceased pooch. Now, the family wants to build a memorial to perpetuate Brownie’s memories.

Himkar Mishra, founder of Summer Shell National Park in Ramnagar in Kunwara Panchayat, said that though he had kept a number of dogs for his farmland’s security, Brownie was a clear favourite and like a family member. The pet, an Indian sheep dog, died of old age on Sunday.

“While I was staying in Madhya Pradesh, I brought Brownie from Pune from an organisation working for animal welfare in 2006; ever since he was a family member,” he fondly recalled while talking to IANS.

After Brownie’s death, a melancholic Mishra family decided to give the pet pooch a farewell befitting a beloved kin and performed all rituals one otherwise observes for a dead human being.

Mishra said that the family will build a memorial at the spot where Brownie was buried. He said that the memorial would be decorated with flowers and named ‘Brownie Park’.

“Brownie was not just another dog for us. He was an integral part of our lives, who guarded our farmhouse with complete loyalty,” he said.

Farmhouse manager Subodh Kumar too pointed out that the pet’s demise was an emotional experience for all staff members as well. “He had become a member of the farmhouse staff. Children also loved Brownie,” he said.