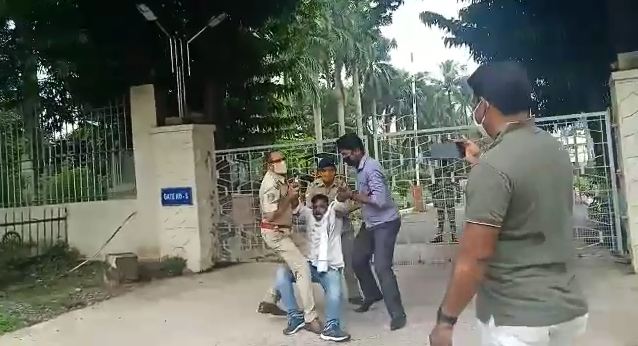 Bhubaneswar: The farmers across Odisha today staged protests against the controversial agriculture bills passed during monsoon session of the Parliament.

The members of Rashtriya Kisan Mazdoor Sangathan protested against the bills at AG Square in Bhubaneswar. Many protestors were detained while they tried to enter into the gate of Lok Seva Bhawan.

The protestors of Navnirman Krushak Sangathan (NKS) were hindered when they tried to gherao Krushi Bhawan in the city.

Meanwhile, the young wing of Congress in Cuttack as well as NKS members also launched protests opposing passing of the farm bills in the Parliament.

Worth mentioning,  three farm bills — the Essential Commodities (Amendment) Bill, the Farmers’ Produce Trade and Commerce (Promotion and Facilitation) Bill (commonly referred to as the APMC Bypass Bill), and the Farmers (Empowerment and Protection) Agreement on Price Assurance and Farm Services Bill – were recently cleared in the Parliament amid ruckus from opposition parties.

Opposing the legislations, the Biju Janata Dal (BJD) in Rajya Sabha demanded to send two bills to the Select Committee for scrutiny.

However, the Government led by Prime Minister Narendra Modi says that new bills will make it easier for farmers to sell their produce directly to big buyers.

PM Modi said that the new laws will reform antiquated laws and remove middlemen from agriculture trade, allowing farmers to sell to institutional buyers and large retailers like Walmart.