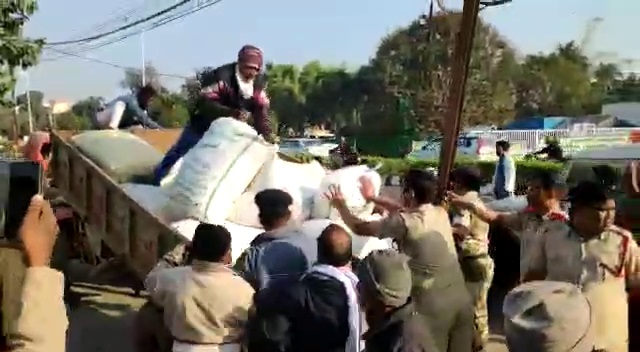 According to reports, thousands of farmers of Navnirman Krushak Sangathan (NKS) were intercepted by police while they were marching towards Chief Minister’s residence Naveen Niwas for gherao.

Holding placards and raising slogans, the agitating farmers moved towards Naveen Niwas in the morning to dump paddy as mark of protest. The scuffle erupted between the members of farmer outfit and police when the farmers were stopped on their way.

Several protestors were detained during the protest. Many women farmers also joined the agitation.

The farmers outfit alleged that the farmers were forced to hit the street as they are yet to get the minimum support price of paddy. Due to alleged irregularities in paddy procurement policy, the middlemen are gaining the profits whereas the producers face loss.

After failed attempt to gherao Naveen Niwas, the agitators staged demonstration at Airport police station. They threatened to protest in all 147 assembly constituencies in coming days if their demands are not met.

“The preparation for hosting Hockey World Cup is in progress, but the state government is ignoring demands of farmers. The government saw the protest in Dhamnagar in Bhadrak district recently. The farmers will gherao entire 147 seats in coming days. This was a trailer; the protest will be intensified. The farmers are ready to go to jail for their rights,” said an NKS member.