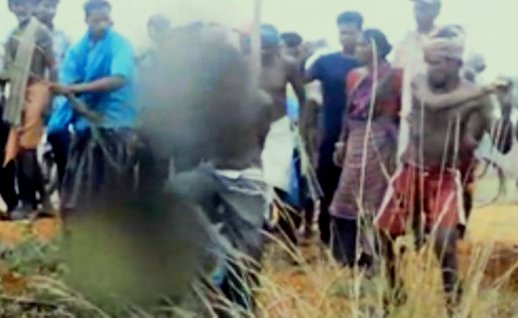 Baripada: In a clear case of mistaken identity, two youths and their father were severely thrashed by a mob near Laxmiposhi Chhak under Baripada Sadar police limits in Odisha’s Mayurbhanj district suspecting them to be child lifters.

The youths who were rescued by the police and were grievously hurt have been admitted to the District Headquarters Hospital here.

According to reports, Amarendra Barik and Jogendra Barik of Bhanjapur village under Baripada Sadar police limits, who are siblings, were on a visit to a relative’s place riding a bike. One of their neighbour’s eight-year-old son was accompanying them.

On the way, they were detained by villagers near Laxmiposhi Chhak, who suspected them to be child lifters.

The mob tied Amarendra and Jogendra to a tree and thrashed them black and blue. Even their father Somanath who had come to rescue his sons was not spared by the mob.

They were rescued by the police from the clutches of the mob.

Somanath has lodged a complaint with the Sadar police in this connection. Police have launched their investigation in the matter after registering a case.

“We received a phone call that a mob was thrashing two persons by tying them to a tree suspecting them to be child lifters. We immediately rushed to the spot. We saw around 200-300 people had gathered and they were beating the duo. One of the youth was aged about 26 years and the other about 14 years. We have rescued them from the spot and they are undergoing treatment at the hospital. We will register a case and take action as deemed under the law,” stated Tillotama Rout, IIC Baripada Sadar police station.