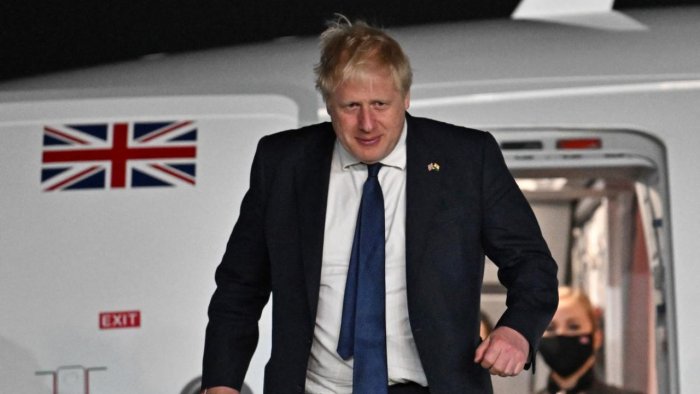 New Delhi: British Prime Minister Boris Johnson on Friday said that he felt like Sachin Tendulkar upon his arrival (in Ahmedabad) and also like Amitabh Bachchan when he saw (his) hoardings everywhere during his visit to Gujarat.

Addressing a joint press conference along with Prime Minister Narendra Modi at Hyderabad House here, he said he had a fantastic two-day tour of India and became the first Conservative Prime Minister who visited Gujarat on the invitation of his �Khas Dost’ (personal friend) which is the home of half of all British Indians. “I had an amazing reception, absolutely amazing,” Johnson added.

Prime Minister Modi while addressing the press, said, “He (Johnson) has played a role in strengthening India-UK relations. His coming to India during �Azadi Ka Amrit Mahotsav’ is historic.”

Modi said that this was his (Johnson) first visit as PM but he was instrumental in strengthening India-UK friendship for many years. It was significant to note that he started his India visit by paying tribute to Mahatma Gandhi at Sabarmati Ashram.

Modi stated that India and the UK have been working on closing the negotiations for a free trade agreement by the end of this year.

“Last year, we established the strategic partnership and we have added the important Roadmap-2030 and during our talks, we reviewed the progress made in this direction and also set some goals,” Modi said.

He added that both the countries have decided to enhance the cooperation in the defence sector. “We welcome the UK�s support in manufacturing, technology, design and development and other sectors for Atmanirbhar Bharat,” Modi said.

Referring to the recent reforms initiated by India in infrastructure modernisation and the National Infrastructure Pipeline, Modi said that India welcomes the increasing investments here by UK companies.

Prime Minister Modi said they also discussed the many developments taking place at the regional and global level. “We emphasized on maintaining the Indo-Pacific region based on a free, open, inclusive and rules-based order. India welcomes the UK’s decision to join the Indo-Pacific Oceans Initiative.”

Modi said during our talks we stressed on dialogue and diplomacy in Ukraine for an immediate ceasefire and resolution of the problem. We also reiterated the importance of respect for the territorial integrity and sovereignty of all countries, he added.

We reiterated our support for a peaceful, stable and secure Afghanistan and for an inclusive and representative government, Prime Minister Modi said, adding that it was necessary that Afghan land should not be used to spread terrorism in other countries.