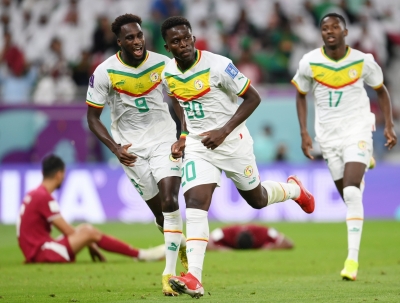 Al Thumama (Qatar): Senegal registered a convincing 3-1 win over hosts Qatar in a Group A clash in the FIFA World Cup at the Thumama Stadium on Friday to keep their Round of 16 qualification hopes alive.

Boulaye Dia, who was booked by the Spanish referee for a foul, got his name on the scorers list with a goal four minutes away from the first half whistle. Famara Diedhiou added a second one three minutes after resuming the play.

Qatar pulled one back through substitute Mohammed Muntari in the 77th minute. Senegal struck their third goal through substitute Cheikh Dieng with seven minutes to go for the final whistle to put the issue beyond doubt for the African champions.

Senegal started well having the chunk of possession and playing long balls into the Qatar box. On the other hand, the hosts tightened up the gaps from the first and tried to find a way up the pitch into the Africa Cup of Nations champions penalty area.

The hosts had kept Senegal at bay and did not pose much of a threat to their rivals except for two long shots which never put Senegal keeper Edouard Mendy to test.

Everything went as per the plan of Qatar’s Spanish manager Felix Sanchez but disaster fell upon the hosts and for central defender Boualem Khoukhi at the last fag end of the first half.

Khoukhi’s mistake proved too costly for the hosts. He missed a clearance inside the area and Dia pounced it instantly, shooting a low drive past Meshaal Barsham from 12 yards’ distance to give Senegal the lead.

Thereafter, Senegal played out the remainder of the game with possession football to troop out of the playing arena with a dominant first half play.

In the second half, Qatar suffered an early blow in the way of goal but regrouped and put up their best display in which period they came close to scoring many times.

Qatar started the second half by conceding a goal from a set piece. Diedhou timed his run to perfection to meet the corner kick taken by Ismail Jakobs and meet at the near post, while beating his marker and angling his header into the opposite top corner.

With an early exit awaiting them, the hosts down by two goals unleashed a flurry of attacks which did pose a challenge to Senegal defense and it was certainly their best attacking football the crowd had seen from them.

Substitute Muntari made his substitution count with a fine goal, Qatar’s first ever at the finals. He got the accurate cross from Ismaeel Mohammad and headed it down firmly to the right corner of the post.

Senegal made sure there were no late minute hiccups by increasing the lead again. It was some smart interplay on the right leading to a good low cross to Dieng inside the box and he did no mistake to send in the nets. Thereafter, Senegal held on its own to deny Qatar any liberties.

After two matches, the hosts have no points while Senegal, which lost to Netherlands 2-0 in the first match of the group, have three points against the name.

Ecuador, the fourth team in the group has three points against their name having won 2-0 against the hosts at the Al Bayt Stadium, in the opening match of the showpiece event.