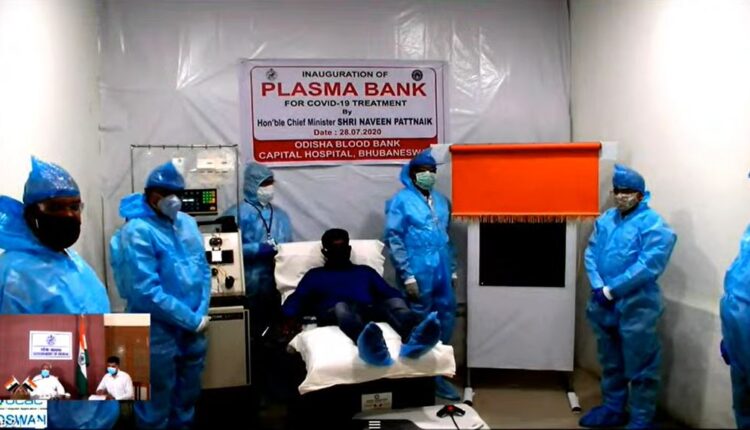 Bhubaneswar: After encouraging results from the plasma therapy, the Odisha government today launched another plasma bank at Capital Hospital in Bhubaneswar.

In presence of the Odisha Health Minister, Chief Secretary and other officials, Chief Minister Naveen Patnaik inaugurated the second plasma bank in the State through video conference. He said preliminary results of the treatment have been very encouraging.

After launching an IT portal for registration of plasma donors during the occasion, the CM said, “Plasma donation started as a government initiative. But I am sure with the participation of more and more people it will be a community driven people’s movement.”

While recognizing the efforts made by doctors, paramedics and police personnel, the Chief Minister thanked them.

Regarding the portal, Chief Secretary A K Tripathy said that donors can register their names and volunteer for plasma donation. Any COVID recovered patient in the age group of 18 to 60 years and having no comorbidities, can donate plasma for the treatment of critically ill coronavirus patients.

Noting that the plasma of one donor could save the lives of two critically ill COVID patients, Mohapatra said that the state government has made all arrangements for smooth collection of plasma.

He said that Odisha was among a few states in the country which has been stressing on plasma therapy and it is currently available free of cost in the state.

Ganjam Collector V A Kulange said that 291 people have expressed willingness to donate their plasma and a plasma selection centre will be set up soon to identify those who can donate.

Chief Minister Naveen Patnaik has engaged several ministers to motivate people who have been cured of the disease to come forward for plasma donation.

So far, 23 such people have donated their plasma in the state.

Earlier the first plasma bank in the State was inaugurated at the SCB Medical College and Hospital in Cuttack.