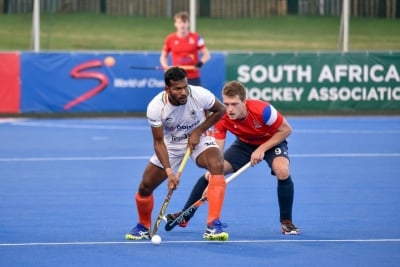 Riding on a good contest against the Netherlands in their previous match where they held them 2-2 in regulation time but eventually lost in the shootout, France looked like a confident bunch in Saturday’s game.

They were nothing like the opponent in the first round where India beat them 5-0. The French were more organised in the match on Saturday, defended well and ensured they didn’t allow India to get off to a good start.

Even though India held the ball possession in the first quarter, and made attempts to create inroads into the striking circle, France’s defensive structure was not easy to break for the Indian forwardline.

While both teams ended the first quarter in a stalemate, it was France who drew the first blood only a minute into the second quarter. It was an Indian infringement in the striking circle that saw France being awarded a penalty stroke.

Victor Charlet made a little mistake in pumping the ball past India’s goalkeeper Krishan Pathak, putting India on the backfoot. It was not until the 22nd minute that India found the much-needed goal. It was Jarmanpreet Singh who fetched India a 1-1 equaliser. Only a minute earlier, Jarmanpreet had done well to earn India a PC but the chance was withered away.

Closing the second quarter in a 1-1 gridlock, France dominated the proceedings in the third quarter. Within the first five minutes of the quarter, France were ahead in the game again when Viktor Lockwood assisted by captain Gaspard Baumgarten scored a sensational goal. He showcased good stick work to make space on the left flank and took a shot that went straight between Indian goalkeeper PR Sreejesh’s legs.

The 2-1 lead put India under serious pressure. Even though they made plenty of scoring opportunities through PCs, India could not muster a goal, thus taking the contest into the final quarter which was intensely fought.

France continued to trouble India’s defence as they set off on the final quarter with a well-converted PC in the 48th minute. It was Charles Masson who was on target, leaving no chance for Sreejesh to make a diving save. India narrowed the lead to 2-3 in the 57th minute when Harmanpreet Singh converted a penalty stroke.

But France were not going to let this match slip away as they upped the pressure with a solid attack, scoring two goals in the dying minutes of the game. Victor Charlet pumped a PC in the 59th minute and Junior World Cup hero Timothy Clement scored a field goal in the 60th minute.

Despite the loss, India continued to remain third in the pool standings. On Sunday, India will play hosts South Africa.