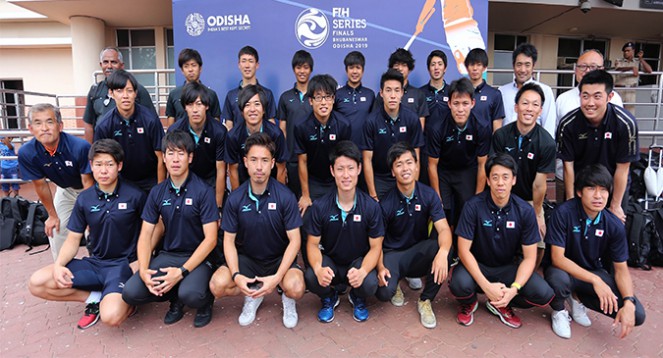 The Japanese side, led by Captain Manabu Yamashita, come into the tournament riding high on their success in the Asian Games 2018 where they won the Gold Medal by defeating Malaysia 3-1 in Penalty Shootout.

The Japanese team consists of six players who have secured more than or close to 100 International Caps, and their Head Coach Siegfried Aikman believes that the experience in the team can play a huge role.

He said, “We have prepared well for the competition here. In the build-up to the tournament, we have played against all different styles of teams which are similar to the teams we will be facing here at the FIH Men’s Series Finals Bhubaneswar Odisha 2019. It was an amazing experience to have taken part at the Odisha Hockey Men’s World Cup Bhubaneswar 2018, and I am very happy to be back again with the Japanese team. We will be focusing on using that experience which our players have gained and will aim at getting better results in this tournament.”

The 60-year-old Head Coach also spoke on the weather conditions in Bhubaneswar, “It was almost impossible for us to prepare in a similar weather because the summer is just starting now in Japan, so we haven’t got the chance to experience such heat. We did play in Korea before coming here where it was hot as well, but not this hot, so we will focus on adjusting as soon as possible.”

Speaking on the opponents his team will be facing in Pool B, Aikman said, “We focus on our own play, we know what we can do, and that is enough. If you have to win a competition like this, you have to win against everyone, and that is what our aim is. We are very ambitious, and we will do everything to win the competition. Of course, we will be taking it one match at a time, but the team is well prepared to face the challenges.”

Aikman also spoke on the importance of the FIH Men’s Series Finals Bhubaneswar Odisha 2019. He said, “We want to win because of the FIH World Rankings, especially because the rankings will make a huge difference in the division of Pools for Tokyo Olympics 2020. We did not participate in the FIH Pro League, so we need to get the most points from here in order to improve our ranking.”

World No. 18 Japan are grouped with World No. 16 South Africa, World No. 25 USA and World No. 39 Mexico in Pool B, but will start the tournament as the favourites to qualify for the Final match, given their recent performances at major tournaments. They will be starting their campaign at the FIH Men’s Series Finals Bhubaneswar Odisha 2019 against Mexico on 7th June 2019 at 08.45hrs IST.