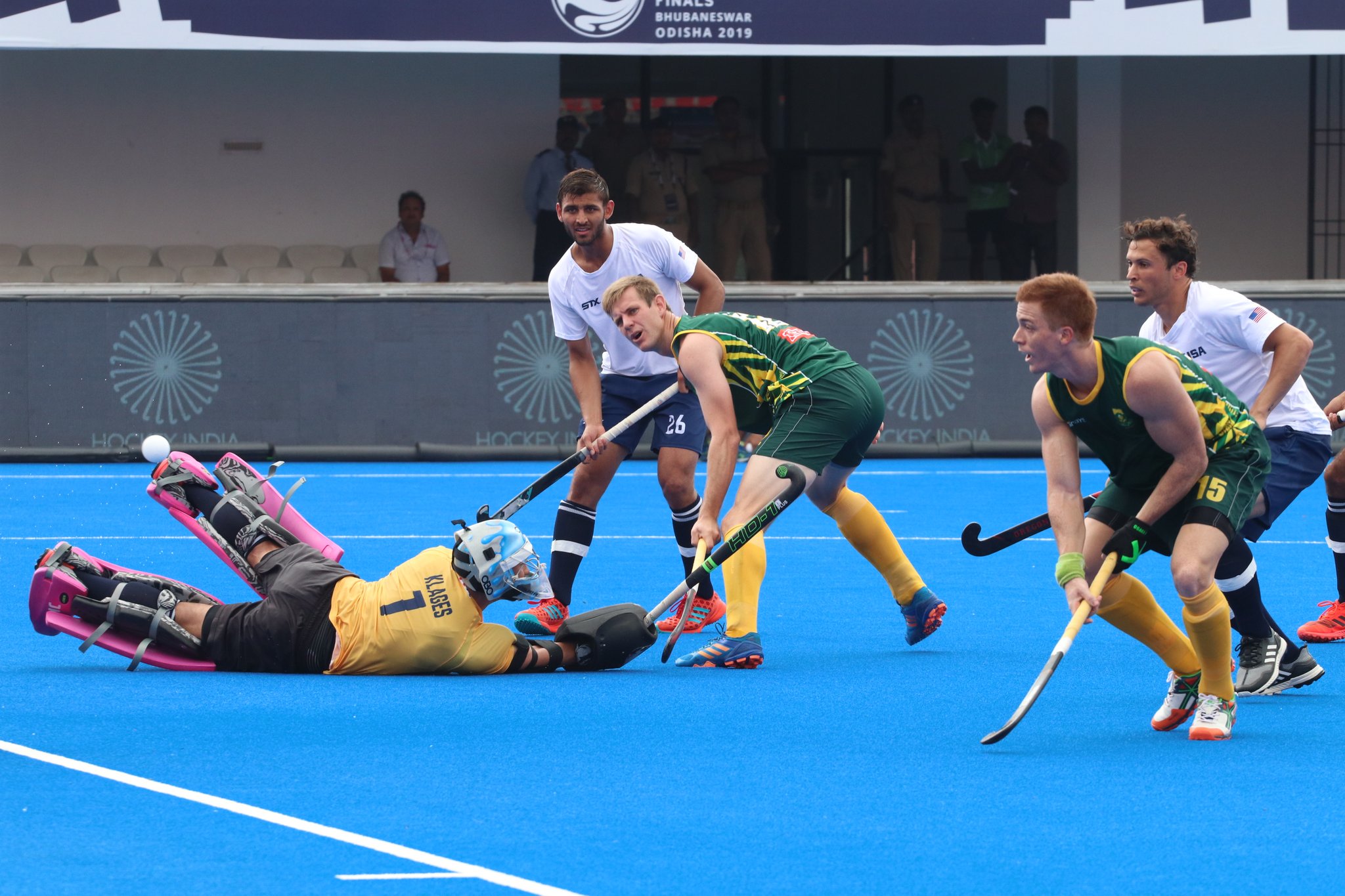 The first game saw the African Champions, South Africa, take on the United States. It was a great start to the event which saw the USA registering the first three points of the tournament.

The opening match of the FIH Men’s Series Finals Bhubaneswar Odisha 2019 saw both teams starting at a high tempo. Just three minutes into the game, South Africa’s Richard Pautz missed a big opportunity to open the scoring, just metres from the goal. Gradually in the first quarter the African champions put pressure on the USA side, which was defending well and playing counter-attacks.

The pattern of play changed at the start of the second quarter with the American side displaying a more attacking style of play. However, after a great save from goalkeeper Rassie Pietersee following a shot from Deegan Huisman, it was South Africa that had a huge opportunity with Nicolas Spooner’s attempt hitting the goalpost. This seemed to give a further boost to the South African players who created multiple chances, through Nqobile Ntuli in particular as well as a series of consecutive penalty corners which they could not convert into a goal. The USA were struggling in the second part of that quarter. Additionally, they had the misfortune to lose their captain Ajai Dhadwal through injury.

The second half started similarly but USA goalkeeper Jonathan Klages – who was later nominated Man of the Match – brilliantly kept his team in the game with three consecutive saves from as many penalty corners. The USA were defending well and managed to produce interesting counter-attacks, therefore growing in confidence. The game was moving into a completely different direction and USA’s Kei Kaeppeler came close to scoring the first goal of the tournament after a remarkably skilful piece of individual play.

But it proved only a matter of time before USA pressure was made to count. USA’s Christian De Angelis scored early in the final quarter, following a penalty corner. From then on, the Americans made every effort to control the game and continued to defend well against a South African team trying everything to reach a more favourable result. Instead of that, it was the USA who ensured their success with a second goal, from Paul Singh this time, shortly before the end of the match.

“To be honest, I was super nervous because this is my first big tournament, so I didn’t know really what to expect. I was glad to help my team as much as I could. I cannot do without my team. So, thanks to my teammates, first of all !”, Man of the Match Jonathan Klages, USA’s goalkeeper, said.

South Africa’s goalkeeper Rassie Pieterse commented: “Obviously it’s not the start we wanted. We had a lot of opportunities which we didn’t take. We’re very disappointed. If you look at the stats today, I think we threw the game away. We will now prepare for our next match against Japan.”