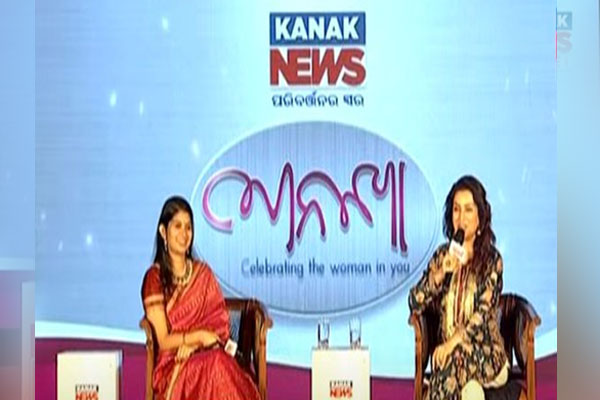 Bhubaneswar: Actress, author and film maker Tisca Chopra on Tuesday talked about women’s empowerment and how to be a part of the change at ‘Ananya: Celebrating the woman in you’ event organized by Sambad Group’s television vertical Kanak News at Hotel Mayfair Convention in the state capital.

The ‘Taare Zameen Par’ fame actress began the conversation with Tanaya Patnaik, Executive Director of Sambad Group with ‘Jai Jagannath, Kemiti achanti’? The convention hall reverberated with the applause of the audience as a token of love for the Bollywood beauty for speaking few words in Odia.

“Financial independence of a woman is extremely important for her to be truly empowered,” Tisca said during her conversation, which also touched other sensitive topics like ‘women pulling women’, ‘work-life balance of women’, etc.

Sharing her views on the possible reason behind women often pulling other women instead of encouraging them, Tisca said, “ I’ve seen a lot of pulling down for several years. But, in the last three to four years, I see a difference in women’s approach towards other women.  We have been living in a patriarchal society where men have been on the apex of everything because of their physical strength. But, things are changing now. Today’s world recognizes intelligence, education and passion, all of which today’s women possess.”

“Education and financial stability is the key and if you have that, no one would be able to pull a woman down. Now that women are becoming financially stable, they’re being more understanding towards the hard work of other women that goes behind. Thus, the concept of sisterhood is taking over,” she added.

Tisca talked in brief about her journey from a meritorious student from a middle class family to an actress in the times when Bollywood was not looked upon in the best lights.

“I come from a family of educationists. Being a school principal’s daughter always put me on spotlight. However, during school, I once played the role of Lord Krishna and I really enjoyed being on stage. Since then, I knew I had to do something on social platform.”

Tisca started her career in the entertainment industry as an assistant director on the sets of the movie ‘Asman Se Gira Hun’. Later, she debuted in a leading lady’s role with the movie ‘Platform’ in which she was cast opposite actor Ajay Devgn.

As the conversation proceeded, Tanaya talked about women’s work-life balance and asked Tisca what her learning has been. To this, Tisca replied, “It’s certainly not easy. There are good and bad days. On some days you’re a good working professional and some days you’re a good mother. But, the biggest asset that could be in your journey is your mother-in-law. Once, you develop a good understanding with her and she is on your side, you’re a rock-star.”

“The next thing is you need to have a clear conversation about your roles with your husband. There has to be an understanding that some days he may have to support you more than other days and perhaps be the house-husband in your absence,” she added.

On being asked about her views on ingrained sexism and how she deals with it, Tisca said, “It trickles down to very small things like serving dinner at the dining table or taking out plates. But, you have to be patient and find a way to explain the concerned person in a way they would understand, instead of fighting.”

Talking about the changes coming up in the entertainment industry in the recent times in terms of opportunities for women, Tisca narrated that for many years, roles prepared for any actress were within the spectrum of ‘Babe, Bhabi or Biji’. However, with more women working as writers, producers and directors, changes are now being visible.

At the end of the conversation, the actress shared her mantra with the audience as she said, “Namaste, I will fly, with Joy.”

Before stepping down the stage, Tisca Chopra was felicitated by Monica Nayyar Patnaik, Managing Director of Sambad Group.

‘Ananya: Celebrating the woman in you’ is a women’s conclave organized by Kanak News. The event was graced by Sulochana Das, newly-elected first woman Mayor of Bhubaneswar Municipal Corporation (BMC), Soumya Ranjan Patnaik, Founder-editor of Sambad, Monica Nayyar Patnaik, MD Sambad Group and many other prominent guests. Tanaya Patnaik, Executive Director of Sambad Group sat down with the guest of the day actress Tisca Chopra for a conversation.

Is there any alternative to UN?