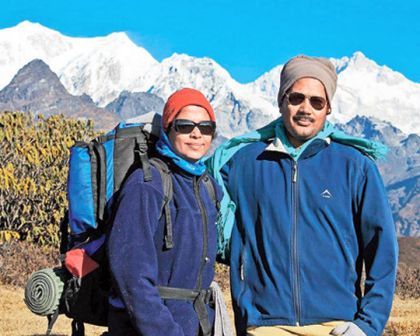 Pradip Sahu (45) and his wife Chetana Sahu (43), natives of Banki in Odisha’s Cuttack district are the first Odia couple to have successfully reached the Earth’s greatest elevation- the summit of Mt Everest.

The couple is the second in the country to have achieved the distinction.

Success came to the couple in their third attempt; the earlier two had to be abandoned due to avalanches.

However, during the descent, the mountaineer couple had to be rescued by Nepalese rescue teams by helicopter to the base camp as Chetana fell ill.

She has been admitted to the ICU of a hospital in Nepal, reports said. Her two hands and ankles are paralyzed due to excessive cold, reports added.

Pradip who works in a private company in West Bengal stays with his wife there.