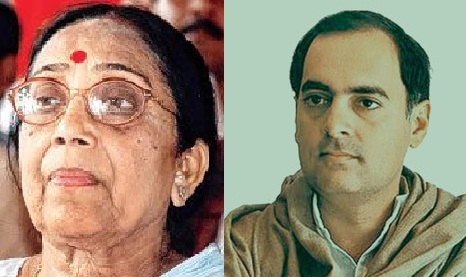 It was the 17th day of August 1981. The Lok Sabha session had just started and there was a lot of excitement around as some of the new members were to take their oath that day. A lady sitting next to a good looking young man asked him nervously, “Do you know what will happen here today?’.

The gentleman smilingly gave an equally innocent reply, “I also don’t know”.
The gentleman in this conversation was Rajiv Gandhi elected from Amethi after the death of the sitting member and his younger brother Sanjay in an unfortunate air-crash and the lady was Jayanti Patnaik, the first lady member from Odisha, who had entered the Lok Sabha from Katak constituency vacated by her husband J.B. Patnaik, the then Chief Minister of Odisha. Both were first timers.

Women have made into Odisha’s State Assembly right from the beginning. In fact, there were two lady members in Odisha Vidhan Sabha long back in 1937. Odisha also became the second state in the whole country to have a Lady Chief Minister as far back as in 1972. Women have been elected to Rajya Sabha from Odisha in the fifties as well. It, therefore, looks very strange that there were no lady members in Lok Sabha from Odisha till 1981. But it is a fact.

In the seven Lok Sabha elections held in Odisha between 1951 and 1980, not a single lady candidate was elected. In a few elections, there were no lady candidates in the fray. In 1980 Lok Sabha elections there were two women candidates; Shanti Kumari Devi in Aska and Kamalini Patra in Baleswar constituency. But none of them won. But when Janaki Ballav Patnaik, who had won from Katak Lok Sabha seat had to vacate the same, as he had to come to Assembly to head the Congress Government in Odisha, a bye election ensued. Janaki Ballav won from Athagarh Assembly seat to enter the Vidhan Sabha and Jayanti Patnaik, his wife, was set up as the Congress candidate in Katak Lok Sabha bye elections, which she won by a margin of nearly 50,000 votes defeating her nearest rival Rabi Ray from Lok Dal.

Jayanti, the daughter of the renowned freedom fighter Niranjan Patnaik from Aska is a multi talented woman. She had done her graduation from Sailabala Women’s College, Katak both in Philosophy and Sanskrit. She had also done her Post Graduation in Sociology from the prestigious Tata Institute of Social Sciences. Popular in Odisha for her translation of ‘Krushnavatar’ by K.M.Munshi published in monthly Odia digest ‘Paurusha’, she is a literary figure in Odisha. She had also been the Editor of ‘Paurusha’ for some time.

As described in Jayanti Patnaik’s biography, ‘Shitala Banhi’ by Bibhuti Bhusan Mishra, on her first day in Lok Sabha, she accompanied her husband to meet Indira Gandhi, the then Prime Minister, in her office. A new comer to Lok Sabha and generally shy by nature, she had a lot of apprehensions in her mind about the meeting. But when she reached Indiraji’s chamber, she got up from her chair and came to the door to greet her, as if she was waiting for her new colleague. It was truly overwhelming for Jayanti and a fitting welcome to the first woman member to Lok Sabha from Odisha!

*The author is a columnist