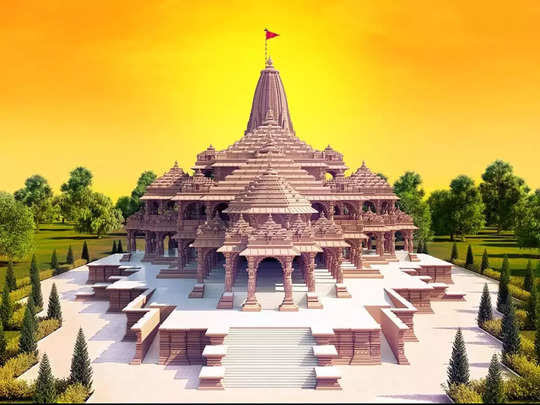 New Delhi: The construction work of Shri Ram Temple (Ram Mandir) – a three storey temple with Garbh Griha and five Mandadapas – is proceeding as per schedule in Ayodhya.

Nripendra Misra, former Principal Secretary to Prime Minister Narendra Modi and now Chairman of Shri Ram Temple Construction Committee in a conversation with IANS Editor-in-Chief Sandeep Bamzai, confirmed that it is all systems go with the first phase set to be completed by December 2023.

He said, “Our first phase completion target is December 2023 when we expect Garbh Griha or the placing of the Shri Ram deity as part of the Pran Prathistan to be rolled out. The construction of the plinth with granite stone started in February 2022 and should be completed by this August. About 17,000 stones of size 5ft x 2.5 ft x 3 ft will be used in the construction of the plinth. The best quality stone is being procured from Karnataka and Andhra Pradesh.”

He stated that the second phase which includes the completion of ground floor and two stories encompassing five Mandapas will be done by December 2024. He said, “The super structure of the temple will have carved Rajasthan Bansi Paharpur stone and this has already begun. Till now 75,000 cft stone carving has been completed. The total requirement is around 4.45 lakh cft stone for the super structure alone in the temple. By December 2025, the temple complex of 71 acres will be complete.”

On being asked about the costing of the bhavya Ram Mandir complex, Misra said, “The costing has not been firmly fixed because specifications are being decided as we are progressing. The aim is to make it last 1000 years so that it captures the grandeur of broad national expectations. However, our sense is that the cost should not be less than Rs 2000 crore.”

On the follow-up query of who is financing the grand temple, Misra added, “It is entirely donation driven, there is no grant from any govt or agency. Hindu asthaa is involved and we have already collected a significant amount as the campaign for donations has extended from village to village, town to city across the country. I would like to add that the contribution ranges from Rs 10 to as much as Rs 5 crore.”

Misra also stated that after detailed technical discussions with the Project Monitoring Consultant and construction agencies, the ensign and drawing of the lower plinth was also finalised with the use of plain cement concrete below the ground, layers of granite stone, layers of Mirzapur stone and final topping by granite stone.

The construction work on the lower plinth will be undertaken by June 1, 2022. As per the plan, the design and drawing of the foundation of Parkota is also in the final stages of technical scrutiny. Various options are being examined taking into consideration the security and convenience of the pilgrims.