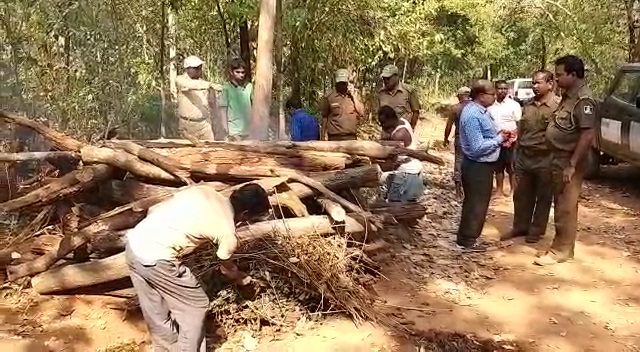 Baripada: A five-year-old elephant died today after battling for life on a roadside near Chaturighat under Karanjia forest division in Odisha’s Mayurbhanj district.

The body of the elephant was cremated after postmortem. It is suspected that the jumbo died of infectious dysentery and dehydration.

According to reports, the male elephant was found ill and lying on the Kendumundi roadside since yesterday. As the jumbo was not able to move due to sickness, four others were guarding it throughout the night.

The forest officials failed to provide treatment to the ailing animal as it was surrounded by a herd of elephants.

“On receiving information, a team of vets had rushed to the spot for medical treatment. We found the elephant was suffering from dysentery. But other elephants that were guarding the ailing jumbo tried to ward off the vet team and changed the location. When we reached that spot with medical equipment and some antibiotics, the elephant had already died,” said vet Dr. Lingaraj Mohant.

“We noticed a herd of elephants making a sound on Kendumundi road. We came to know that they were protecting an ailing elephant. We tried to disperse the herd but failed. Later, we called up the vet for treatment. Despite our effort, we could not approach sick elephant and provide it the medical treatment. The animal might have died of dehydration and dysentery followed by infection,” said Batakrushna Padhi, Assistant Forest Conservator, Karanjia forest division.

The veterinaries who conducted a postmortem on the elephant will submit the report shortly, he added.

Odisha woman axed to death by hubby over ‘extramarital affair’