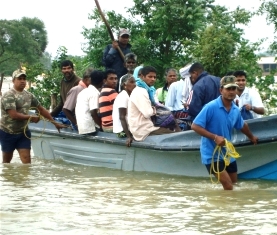 The damage incurred from the floods and landslides value up to $2 billion (147.37 billion Sri Lankan rupees), he said.

According to a preliminary assessment, so far 101 people were killed in days of heavy rains last week while 620,000 were affected across the island.

However, rescue teams said the numbers were much higher.

The Sri Lanka government, through the 2016 budget, has allocated Rs.10 billion for damage through natural disasters and those funds were being utilised to begin resettling families whose houses were partly destroyed, the minister said.

“There is a lot that needs to be done and we want to get the country back to normal as soon as possible. The government is putting in all its efforts to provide relief to the affected people,” Karunanayake said.

He added that next month new laws will come into effect, requiring people to get an environmental clearance to construct a house. This would ensure that houses are not built in landslides and floods prone zones. (IANS)

US embassy’s workshop on air pollution begins in Lucknow