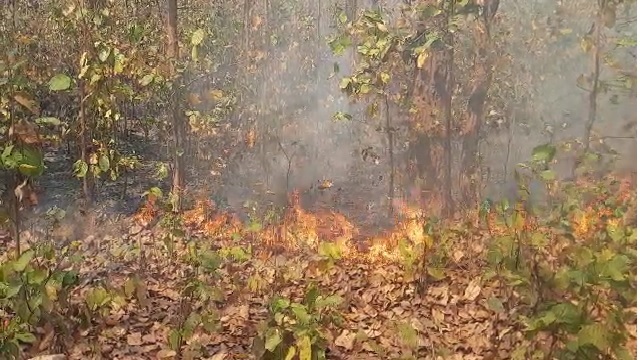 Baripada: A major forest fire has been raging in Similipal sanctuary spread across 2,750 square kilometer for the past one week endangering the lives of animals. Moreover, many trees in the sanctuary have been turned into ashes due to the forest fire.

As per reports, the fire has already spread to Betanoti, Rasgobindpur and Morada forest range of the sanctuary.

Union Environment Minister Prakash Javadekar today directed officials to take immediate action to bring the Similipal fire under control and report him on the measures. In a social media message, Javadekar informed about his decision.

I have ordered officers to take immediate action and report it to me . https://t.co/lVYvfJJlkI

Earlier in the day, Union Petroleum and Natural Gas Minister Dharmendra Pradhan drew the attention of the Union Environment Minister on the Similipal fire by tagging him on the social media. Pradhan also tagged Odisha Chief Minister Naveen Patnaik on the social media post and sought his attention.

Initially, Akshita M. Bhanj Deo, the Princess of Mayurbhanj posted a message on the social media saying about the devastating fire in the Similipal sanctuary, Asia’s second largest biosphere.

Thankyou Sir, the fires have been raging for a few days, we need urgent help from the army/disaster management unit to contain this at the earliest and have a plan in action to work with conversationalists/wildlife experts to make an assessment of the damage done to our wildlife.