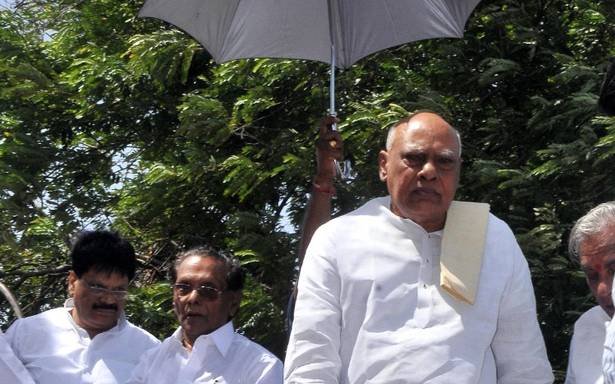 Hyderabad: Former chief minister of erstwhile Andhra Pradesh Konijeti Rosaiah passed away on Saturday. Following a drop in pulse rate, Rosaiah was rushed to a hospital by family members, but did not respond to treatment, and was declared dead, sources said.

Sworn in as chief minister following the death of Y.S. Rajasekhara Reddy in a helicopter crash, Rosaiah had served as the chief minister of Andhra Pradesh from September 3, 2009 to November 24, 2010.

After stepping down as chief minister, the wizened Congress-man had a two-month stint as the Governor for Karnataka, before serving as Tamil Nadu governor, from 2011 to 2016.

Earlier, he had served as Finance Minister and has the distinction of presenting the state budget for a record 15 times.

Chief Minister Y.S. Jagan Mohan Reddy has expressed grief over the demise of Rosaiah, and conveyed condolences to the bereaved family members.