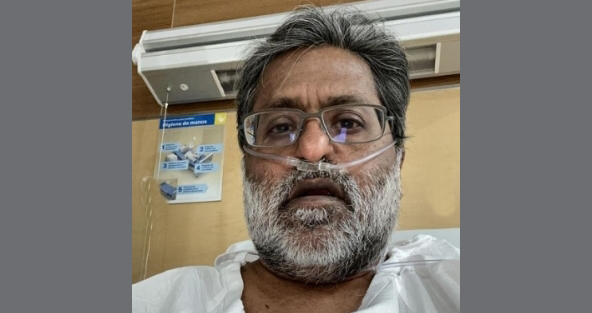 New Delhi: Former IPL Chairman Lalit Modi on Friday revealed that he is on 24×7 external oxygen after contracting Covid-19 twice in two weeks and deep pneumonia.

The 59-year old took to social media to give updates about his health, saying that he was airlifted to London from Mexico after three weeks of confinement.

“After 3 weeks in confinement with a double Covid in 2 weeks accompanied by influenza and deep pneumonia – and post trying several times to leave. Finally landed via air ambulance accompanied by two doctors and superstar super efficient son who did so much for me back in london,” wrote Lalit in his instagram post along with his picture from the hospital bed.

“The flight was smooth. Unfortunately still on 24/7 external oxygen. Thank u to all at @vistajet for going the extra mile. I am extremely grateful to all. Love to all. Big hug,” he added.

In another post, he also mentioned about saviours — two doctors– who took care of him.

“With my two saviours. The two Drs seriously for 3 weeks monitored me treated. Me 24/7. 1 Mexico City based whose care I was under and the second my London Dr who specifically flew in to Mexico City to accompany me back to London. I have no words to describe of they sacrificed there time etc to get me out. Still need time to recover. Currently on 24/7 external oxygen,” wrote Modi along with pictures of two doctors.

“I was I thought touch and go. But my children and thief friends and my close friend @harish_salve_ who were all with me 2 out of my three weeks fully by my side. They are all my family and part of me. God bless. Jai hind. Not to forget the @vistajet crew. Who were better then par excellence. Thank u my friend @thomasflohrvista,” he added.

Last year, the businessman had made his relationship with Sushmita official on social media, with a note and an array of photos. However, the duo haven’t been spotted much post making their relationship public, leading to various speculations.