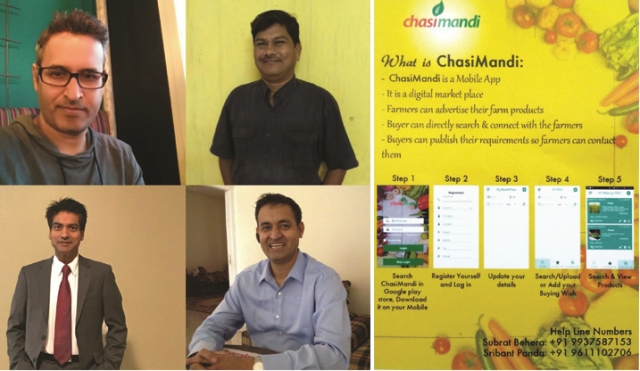 Bhawanipatna: In view of distress sale of paddy and vegetables across Odisha, four techies including two NRIs from Kalahandi district have developed a mobile app called ‘ChasiMandi’ to help farmers to sell their produce.

A team of four techies led by a Bengaluru-based IT Engineer Sribant Panda of Kotagaon under Kalampur block in Kalahandi district and his brother IT Engineer Srikant Panda, who is settled in the US, his son-in-law Santosh Mishra working in banking sector in the US and his another son-in-law Subrat Behera, who is a lecturer at Koksara College, as other members have successfully developed the mobile app through which the farmers can get registered and update data about their crops.

‘ChasiMandi’, the farmer’s digital market for local produce in rural India, was launched in April this year. Such initiative has created hope among the bewildered farmers for the first time.

Sribant has started making the farmers aware of the mobile app with help of BDOs of Kalampur, Junagarh, Dhrmagarh and Koksara through various workshops in those areas.

Sribant, who used to visit his village every year, thought to develop such mobile app after realising the difficulties of the farmers for selling their produces.

ChasiMandi mobile app, a unique initiative to bring both the sellers and buyers in one platform, has become a boon for the farmers in Kalahandi district, Sribant said.

Eid celebrated with gaiety across Odisha